Share All sharing options for: Phoenix Coyotes @ Minnesota Wild: The Morning After 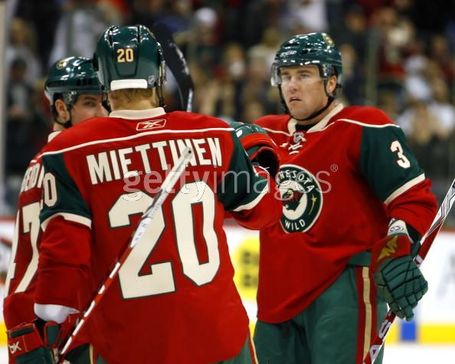 The Minnesota Wild, led by Marek Zidlicky's two goals and one assist, combined with Niklas Backstrom's 24 saves, shutout the Phoenix Coyotes 4-0 in front of 18.568 at the Xcel Energy Center Thursday night. After a slow first period with little action, Zidlicky started the scoring in the second with a pretty feed from Marc-Andre Bergeron in the high slot. The two teams battled back and forth until 4:17 remaining when Andrew Brunette scored on a beautiful no-look feed across the low slot from Zidlicky. In the third period, the Wild scored their third power play goal, 3:10 into the frame. Erik Belanger notched one on an absolutely gorgeous tic-tac-toe passing game with the man advantage. As time wound down, there was 1:07 left as the Wild ended the scoring with yet another power play marker. It was Zidlicky's second of the night on a bomb from the point.

The power play really saved the Wild tonight, as without the man advantage, I wasn't impressed with the offensive output. Lemaire's line juggling didn't impress. The thought was to add more punch to the offense. Well, there weren't a large number of even-strength chances tonight. The best chances came either on the power play or the two shorthanded opportunities on which they should have cashed-in.

Cal Clutterbuck continues to wreck havoc on the ice, though tonight he has as many minutes as penalty minutes. Umm Cal, I understand throwing down when someone goads you on, but next time think of your PT. Oh, and although the other guy didn't take his helmet off, you should still drop yours if you wear a visor. Gretzky was correct there.

It's certainly fun to watch this team when they're clicking, and my goodness did they look good on the power play. Every single time they gained the zone with the man advantage, you assumed they were going to score. It was just outstanding. Now, if only they can do that once in a while on even strength.

Also, Kevin Porter, you should be absolutely annihilated for running Backstrom. That was a cheapshot and the fact that the ref was staring right at you as you bowled him over full speed doesn't change that fact. That was absolutely out of line, and someone at Toronto should be calling you to tell you so. That was a very, very dangerous play. Jerk.

Oh, and welcome back Owen Nolan and Brent Burns. It was nice to have you out there. Burnsie, feel free to stay up front as long as necssary, so long as He Who Must Not Be Named continues to stay out of the post-game analysis. He's doing a fantastic job right now.

"Our special teams has been really good," said Jacques Lemaire, who spoke to his team prior to the game about spreading out while on the power play. "And this is why we have the points we have now, because, five-on-five we [haven't scored] a lot of goals so far."

"I think this was one of the best games for us this season, to play the whole 60 minutes of hockey. We didn’t give them anything. Our PK was really strong today. We got a lot of penalties, but they killed them. I think that’s a sign of a good team." -- Niklas Backstrom

"That was for my wife. That's what I do over my career. I was on my own for two months. All by myself. It was a big game for me." - Marek Zidlicky

On the power play. "Sometimes when the players don't know what they're doing, it works." - Erik Belanger

"It was a good, old fashioned butt-kicking. It was almost like an NHL group vs. a junior team. Four-0 was flattering. If it wasn't for Bryzgalov it would've been 8-0." - Wayne Gretzky

"It comes down to the power play," Phoenix captain Shane Doan said. "We had some opportunities. They capitalized on theirs and we didn't on ours. That was the difference in the hockey game." 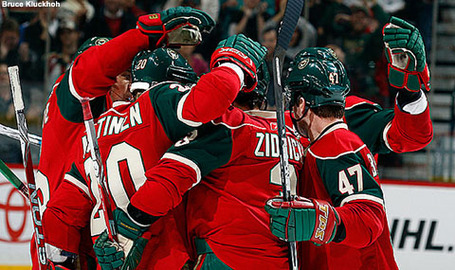 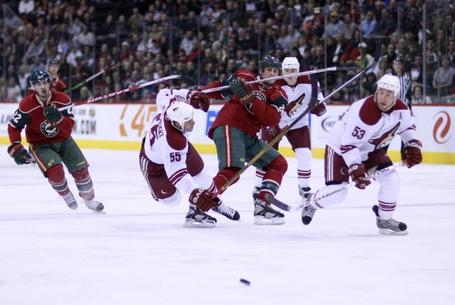 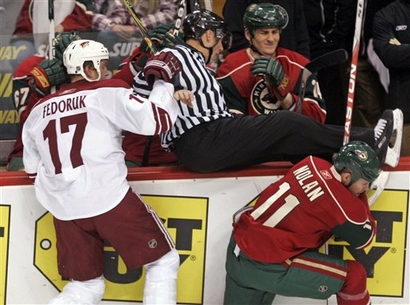 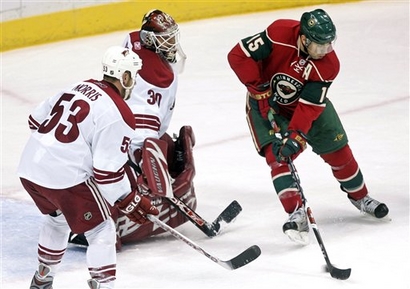