I got a transcript from a meeting at Versus Network home office this morning.  It turns out they had to call for an emergency meeting today to discuss the results of Wild's 2-1 shootout victory over the Pittsburgh Penguins.

The theme of this meeting seems to read like this:

"Yes, I know, we had the Penguins and Sidney and Malkin and those guys on again last night.  What happened, did they score too many goals and break the scoreboard?"

"No sir, quite the opposite."

"Sir, weren't you watching the game?"

"Are you crazy?  Dancing With the Stars was on last night and it's almost the end of the season!  I figured with the Penguins playing we were guaranteed a score-fest.  OK so what happened?"

"The final was 2-1 in a shootout and both of the goals were scored halfway through the first period.  That means we had two and a half periods where there were no scores and not much else going on."

"All right, this sounds bad.  How about fights?  There had to be a lot of those.  Minnesota's got some guy called Boogie Man, right?  He's got to be exciting, right?"

"He didn't fight tonight sir, hell, he didn't even play.  In fact, there was only one fight and it was between a couple of players we don't really care about.  We sort of care about Jordan Staal, but he's no Crosby or Malkin."

"Dear Lord.  Obviously Pittsburgh would never let us down like this so this has to be Minnesota's fault.  At least we'll never have them on again the rest of the year, right?"

Yeah, I know, fantasy is fun and I can enjoy creating phony dialogue like this.  Sad part is, you know that at least the sentiment of this is exactly what's going on over at the hallowed halls of Versus programming in Philadelphia. 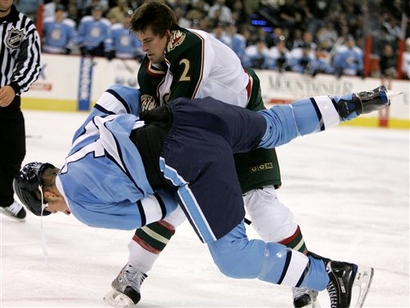 A Versus exec was quoted as saying: "Who the hell are these guys?  I want Boogie!"

Like I talked about last week, the Wild seemed to be groomed to be the nationally televised patsy for the biggest and upcoming stars of the NHL according to Versus.  This time they got the biggest fish in the pond in Crosby and the Penguins and the Wild showed the Pens, Crosby, Malkin, Staal, Fleury...all of them, what it means to be a Jacques Lemaire coached team in the NHL and learned about something that Michel Therrien tried desperately to show his young Pens in the Finals last year:

For the Wild, this is the exact sort of game they wanted to have against a highly talented and excruciatingly potent offense like Pittsburgh has.   The pre-game checklist had to look like this:

For the Wild and Wild fans, this was the exact thing you were hoping for out of a game against a team like this.  Low scoring, to hang around in it until the end and then get the opportunity to beat them the way you want to.  While I'm sure the Wild would've preferred a win in regulation or overtime, doing it in the skills competition will hold up just fine.

For the NHL fans watching this game hoping for a Sid the Kid show or a Malkin Madness lovefest this was a bitter disappointment and this is where you folks will come to hate me, but the best thing for the NHL (financial success-wise here) would be to have them stomp a mudhole in everyone's rear-end and to do it while giving everyone the finger.

Of course, Jacques Lemaire would rather be eaten alive and set on fire than to allow that happen to any team that he's coaching and I can't fault him for that, it's not up to him to make the league look good, its up to him to win games.  Period. 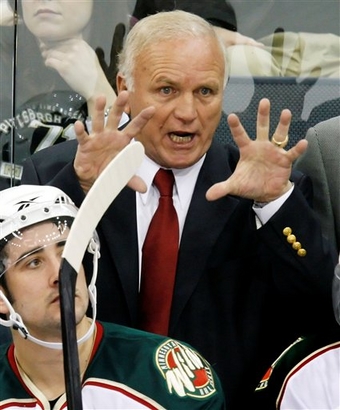 Then again, if the folks at Versus knew what hockey was, they'd probably try to force Gary's Fair-Haired Boy at us in games where his abilities would be better put on display instead of watching Crosby figure out where to dump the puck into the zone the correct way or dare to skate through defenders all night long.

This is where I respect the Wild, albeit begrudgingly, that they'll stick to their gameplan regardless of the situation.  Call it stubborn, call it boring, call it whatever you want to - for Jacques and his disciples it's what works.

I can only hope that folks who tuned in to see the Pittsburgh circus on ice took note of Mikko Koivu and Nik Backstrom because they are the real deal.  I know Backstrom gives you fits sometimes, but every goalie in history has given the hometown fans ulcers.  Just deal with it.  Nik isn't like Manny Fernandez and he's not going to let you down.

That offense though... That might do the job.  If TSN's Bob McKenzie's gut is right and Gaborik is on the way out sooner than later, that alone might be the lift this team needs.

Another scoring forward or two might do the trick as well but let's not get ahead of ourselves.