I know we've been having some fun here with Marian Gaborik's situation.  You know, with him being an apparent petulant child about his contract, his apparent wont to hit free agency at the end of the season, his supposed desire to just get out of Minnesota and shake off the shackles of Jacques Lemaire's system and become the scoring dream machine that most every expects that he would be just about anywhere else.

Most everyone has been more than happy to pack his bags, send him out of town and kick him in the ass on the way out.

I get that, I understand it and I even advocate feeling that way.  After all, if a guy seems to not want to play for your team...why bother investing your time, emotion and care into what he's doing on the ice.

The pickle the Wild find themselves in, however, is that they desperately need him. 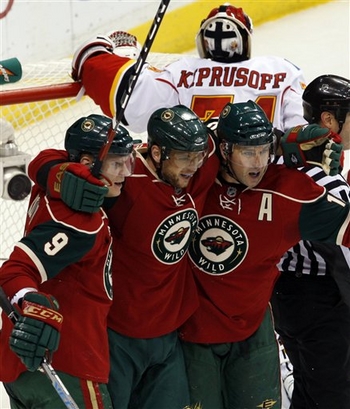 Reunited and it feels so...uneasy?

Marian Gaborik's first game back from injury, his third game of the season mind you, seemed to function as a "getting to know you" exercise through the first half of the game.  Gaborik started off with Stephane Veilleux and James Sheppard as his linemates but by the third period, he was out there working his ways with the top unit of Mikko Koivu and Andrew Brunette.

The band was back together again and they picked right back up where they left off.  Gaborik assisted on Brunette's goal in the second and scored one for himself on a pretty behind-the-net feed from Brunette in the third to tie the game at two.

Through much of the final 30 minutes of play, Gaborik got his legs back and then eventually his ideal linemates and the offensive attack and punch that Coach Lemaire has been asking to appear (mmm, irony) was there.

What I saw from Gaborik was the same Marian that thrilled and electrified the fans in seasons past.  He was jumping in on the action, the cycle was working and most importantly, he was flying towards and all around the net.  He was shooting often and not generally poor shots either, a problem the Wild were having in trying to deal with Calgary's stifiling manner of play.  Let's face it, Mikka Kiprusoff isn't letting in too many soft shots from the blue line these days.

What Gaborik adds is a different element from the cycling and grinding it out offensive style we're used to seeing out of the Wild when they dig in in the offensive zone.  Gaborik adds the element of surprise and a playmaking eye as well as an ability to make every shot an instant scoring chance.  Given the Wild's offensive impotence during their losing streak, well, anything resembling a big time playmaker can help and it gets lost around here that that is precisely what Gaborik is.

This is what is going to drive you guys nuts.  All while he's healthy, and it's certainly in his best interests to stay that way, you're going to need him and his offensive output as scoring one goal per game isn't getting it done no matter how good Nik Backstrom is in net.