Minnesota Wild vs. New York Islanders: The Morning After

Share All sharing options for: Minnesota Wild vs. New York Islanders: The Morning After 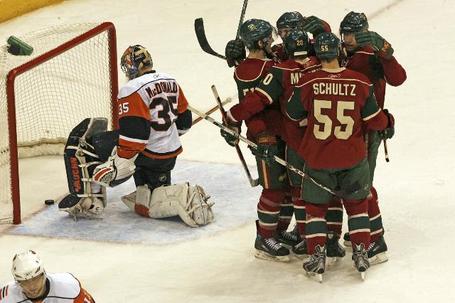 It started off ugly. Scoreless after the first, yet again. Gave up the first goal after having a huge number of chances. Tied 1-1 after 2, while outshooting the opposition 26-10. Making an opposition goalie look like a Vezina award winner (though to be fair, Joey MacDonald was lights-out tonight). However, that one goal with less than a minute left in the second was the spark the Wild needed. Sheppard's feed was a thing of beauty, and Stephane Veilleux answered the call by banging it home to finally cause the Team of 18,000 to breathe easier. I asked the Twitterverse if that was going to be the goal that opened the floodgates, and it certainly was.

The third period was a thing of beauty. The Wild saw that MacDonald could be beaten, picked up the pace, crashed the net and took it to the overmatched, injury-stricken New York Islanders. On the first goal of the third period, Derek Boogaard led the 3 on 2 (yes, I'll let that sink in, Derek Boogaard led an odd-man rush), fed the puck nicely to Krys Kolanos who took a good, low, hard shot on MacDonald. With Gillies and Boogaard in the low slot, MacDonald had no chance to control the rebound as the puck went off Boogaard's stick, off MacDonald, and right to Gillies who picked up the garbage, finally netting the young man his first career NHL goal. At that point, it was on. The Wild were up and down the ice, pinching on D, breaking out with speed, and creating all kinds of problems for the Islanders. Mikko Koivu then won a draw, dropped it to Kim Johnsson, who fed it back to Koivu. At this point, Koivu toe-dragged so nicely that the Islander d-man is still looking for his breezers in the circle, then snapped a laser over MacDonald's left shoulder into the upper corner. That pretty goal was then followed by Pierre-Marc Bouchard's pass to himself, creating space and putting a gorgeous shot by the helpless MacDonald to complete the scoring.

This game was really never in question. Even when it was 1-0 Isles and tied at 1 the Wild controlled the run of play. Only the workmanlike effort of Joey MacDonald kept this game close. Kudos to you Mr MacDonald, and well done Wild. 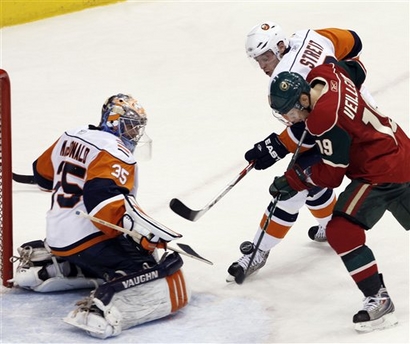 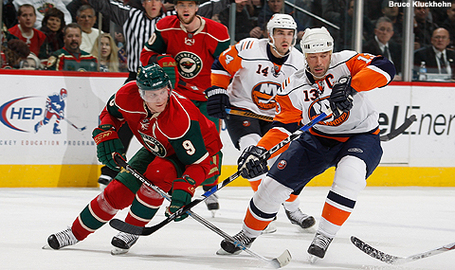 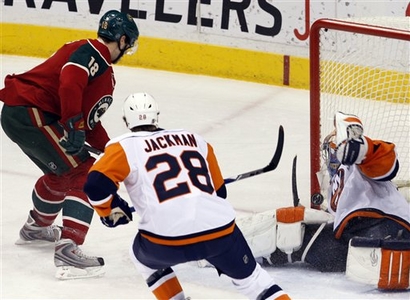 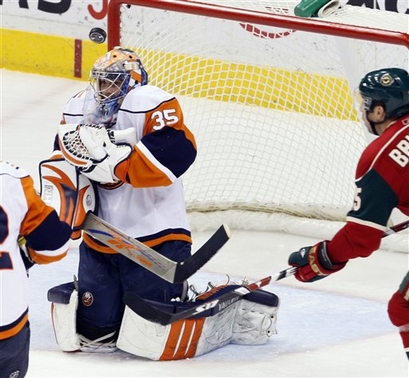