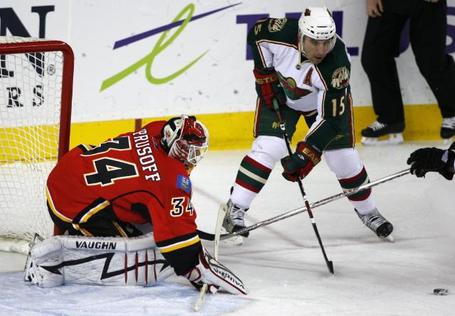 Scoreless after the first again, for the 11th straight game.The Wild had a decent first 10 minutes, but then were so out played in the next 10 that the shots went from 7-3 Wild to 14-8 Flames by the first intermission. The second and third periods were even in shots 7-6 and 9-9, as well as 1-1 on the scoresheet (thanks to Stephane Veilleux's pretty rebound in the waning seconds of the second), but in the end, that first period was the difference in the game. Yes, Eric Nystrom took a puck off a bad bounce over Brent Burns' stick and went in shorthanded to score the game winner in the third, but had the Wild showed up for the last half of the first period, it wouldn't have mattered.
Something has to be done. This team is 3-9-1 in December. It's at the point where the Wild are so bad right now that people are telling me to promote a "Stop the Streak" campaign to end the consecutive sellout streak at the X. I mean, seriously, a team can't fill a roster on a 1-game road trip because the captain has to go home to attend to family matters? This team really only sent 6 defensemen on a 1-game road trip? What the hell are they thinking? Was this a Craig Leipold enacted travel ban? I notice that wild.com doesn't have a recap posted either, just the game summary put out by the NHL. What the hell is going on inside the X?
Now, I have no idea what's brewing on the trade front, nor have they released any information on why Gaborik hasn't played in the last two games, other than the glass groin (and it might be true, check out my recap from the Hurricanes game where I pointed out his hesitation to drive with the puck) but it reeks of something brewing. Maybe the Gaborik/Johnsson for Kovalchuk/Armstrong has some legs, but even so, you can't just give these games away. The Northwest Division is way too close for that. One point is all it takes to go from a 3-seed to an 6, 7 or 8-seed.
Anyway, I'm not happy, nor is the Team of 18,000. And frankly, we shouldn't be. This is not a small market team. This is not a team that can afford to miss the playoffs. We're getting restless here Doug, Jacques and Craig. Do something. Say something. We're waiting!