It appears that this is the end of the world as you know it and you don't feel fine.

All is lost and the glaring problems the team has had all along are rearing their ugly heads so much that even the biggest die-hard fans are taking issue with them.

Adding to that is the nonsense with Marian Gaborik.  In fact, Jacques Lemaire hired a special assistant to deal with Gaborik personally, but Gaborik wanted no part of his treatment. 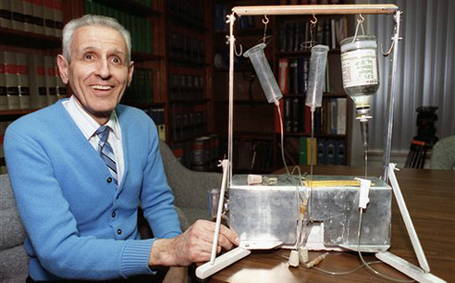 Unfortunately some of his "coaching methods" were adopted by the scoring forwards and...well, you see how that's worked out.

I know, I'm having some fun here and I hope you're laughing because this is not a good situation right now.  Let's face it, when the management and players and coaches are all upset at the beat writer for being critical...well, that's just misappropriated anger.

If it takes the local writer to fire up the team...I just don't know what to say about that.  If it works, give Russo the team MVP.  Forget Koivu, forget Backstrom...it's all Russo that made it happen.  The more realistic way to view this, though, is a team that's entirely too frustrated with themselves.

They know that scoring one or two goals a game isn't going to do much for them in the win column, they know that their most talented offensive player either can't or won't (his fault or management's fault is neither here nor there right now) be there more often than not to help them out.

There are some good young kids on this team, but most other teams allow these kids to buy their time in the AHL or on the third and fourth lines to get their feet wet.  The Wild can't do that right now because of Gaborik's absence, because a lot of the kids in the minors haven't developed well, fast or at all so the one's that have have to come up and get the weight of the world put on their shoulders.

Is this Lemaire's problem?  To a degree, sure, but he's making the best of what he's got to work with given the nightmare scenario that's playing out with Gaborik and the lack of true scoring talent that is developing within the system.

I know not everyone is going to have guys like they have in Detroit digging through the Scandanavian wilderness to find all the diamonds in the rough, but it can't be a lot to ask that these guys are able to root through Canadian juniors, American collegiate hockey and some of the European junior leagues to find better players to make this team win eventually.

After all, if the Wild aren't going to be factors in NHL free agent spending they damn well have to be better at scouting and development than everyone else if they're to become a perennial Stanley Cup threat.

That's not the case right now and it hasn't been the case at all in the last few years.  That's the big problem here and that's the issue Craig Leipold is going to have to look deeper into.

Winning makes everything feel better and this team is a hot streak away from having much better standing in the West.  The West is going to be this tight from here on out, or at least until teams decide they want to retreat to the back of the pack.  Teams you thought were dead before won't be dead for long (Dallas) and teams that were knocking heads earlier have cooled off (present company directly included) to join in the rest of the clusterfark that the bottom half of the Western Conference has become.

If the goals start coming, this team will do just fine.  No one in the Northwest Division is running away with anything.  Sure, you can worry about Vancouver but their fall from grace will coincide with Jason LaBarbera getting starts in goal.  They will be more of a pain in the ass with Mats Sundin teaming up with the creepy Swedish ginger twins, however.  Calgary is an aberration, as is Colorado.  Edmonton's scoring has to stay dormant or else the ghost of Roloson will haunt everyone.

Minnesota can't worry about where they are in the West - they just need to worry about their division and start beating all of them.  For that to happen, they have to ask special assistant  Coach Jack to unhook the rest of the forwards from his "Dream Machine" and maybe promote him to the front office.