Folks out East here might not realize it (Nick in New York excluded of course) but the Minnesota Wild just keep on winning.  Folks here don't have much excuse for not seeing the Wild, they've been the Versus Network's prized pet the last month, and even a stinker of a game against Colorado may have tricked folks out this way that maybe, just maybe, these Minnesota guys can light it up whenever they want.

Well, I won't go and say that, that may have been the worst game the Wild played all year.  Fortunately, the Wild followed that up with maybe their most sound and destructive game against St. Louis in a 4-0 shutout win.

Backstrom gets another shutout, Mikko Koivu continues to be the man and most notably to a mostly ignorant Eastern media... Jacques Lemaire is putting everyone on notice that he's still around, he's still preaching the same game he always has and he don't need no stinking superstar to make it happen. 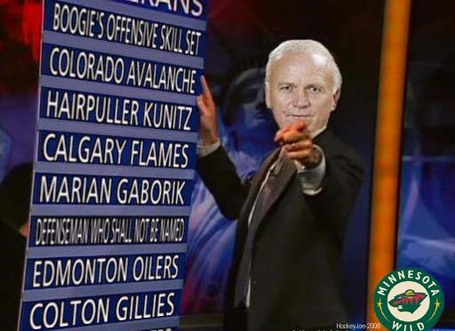 The win over St. Louis, while not televised for most everyone outside of St. Louis and Minnesota, was a prime example of what the Wild want to do night in and night out.  They want to shut you down.  They want to frustrate you.  They want to pepper your goaltender with a ton of shots.  They want to punish you with the power play.

The Wild needed that game regardless of who the opponent was.  After the slopfest the game against Colorado was and how we're sure Jacques made everyone's life miserable in practice after that all up until the game with the Blues, another stinkbomb game would be enough to shake the team up a bit and it would certainly cause a metric ton of fretting and worrying around here.

I see things this way:

Arguably the team's best defenseman is playing at forward, that weakens things on the backend - the part of this team that has to play picture perfect each night.  The Wild appear to have added two solid offensive-minded blueliners to help buoy the offense in Zidlicky and Bergeron.  Oh sure, maybe you guys want Bergeron to shoot some more, just remember to be careful what you ask for.

Once Burns is allowed to go back to defense and things with the forwards start to show some consistency this team is going to make life in the Northwest Division very difficult for everyone else.  Fact is, the other teams in the division look at Minnesota with envy and lust in their eyes.

They're envious of Nik Backstrom in Denver, Edmonton and especially right now in Vancouver.  These teams would kill to have a stopper like Backstrom whose steadiness inability to get shaken off his game provide the "silence" in net the Wild need.  Sure the season started off with folks wondering when or if Marian Gaborik was going to re-sign in Minnesota but now?  Now it's time to change the tune:

Get Backstrom taken care of sooner than later.

The Canucks and Calgary Flames see Mikko Koivu and the Wild blue line corps and think, "Man, if we could get some of that the things we'd do..."  You don't think the Flames would like a few more solid offensively sound defensemen to play with Dion Phaneuf?  How about an incredible two-way forward like Mikko Koivu to go with Jarome Iginla?  You think Mike Keenan wouldn't sell his mother to pirates to get Koivu?  You're crazy.

When the Wild play their game soundly and the system is functioning the way Jacques designed it to, teams in the Western Conference are going to have a very hard time dealing with the Wild.

Jacques knows this all too well and while a 4-0 win over a mediocre Blues team might not register in anyone's mind it stands out to me.  The Wild are going to be a huge burr in the ass for everyone in the West, especially the divisional mates.

You're all on notice now.