Minnesota Wild vs. Vancouver Canucks: The Morning After

Share All sharing options for: Minnesota Wild vs. Vancouver Canucks: The Morning After 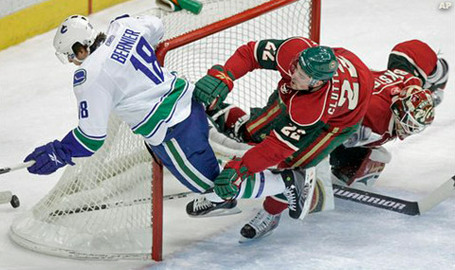 After a great team effort against St. Louis on Wednesday, the Wild came out and laid an absolute egg for the third time against the rival Vancouver Canucks. The Wild offsense was so anemic, that shots were 14-3 Vancouver after the first period, and only one of those three shots for Minnesota came with at even strength. While it was only a one-goal game, you never had the feeling that the Wild were ready to break out and take over. Losing Owen Nolan to yet another lower body injury didn't help matters, as he went out in the first period after catching an edge along the boards and falling awkwardly.

The only enjoyment for the viewing audience was the constant bickering, pushing and eventual fights between these two teams who don't much like each other. Not surprisingly, Alex Burrows was in the middle of much of it, causing the fight between James Sheppard and Ryan Kesler in the first. Then in the third, as Willie Mitchell got three guys to gang up on Derek Boogaard, Jason Jaffray (scorer of the GWG) goaded Brent Burns into a fight to get him off the ice for 5 minutes. Of course Jaffray may not have a clue what year it is after the shots Burns was giving him. I can't believe Jaffray got out of the X with his nose attached. The aftermath of that scrap however, was completely unjust. Boogaard, who up until that time had played a very solid game in both ends, was given a 10 minute misconduct along with Darcy Hordichuk. That call was ridiculous, and Jacques Lemaire let the officials know.

Unfortunately the Wild couldn't capitalize on the enthusiasm of the crowd and it didn't fire up the team enough to pot the tying marker as time ran down. It was a very disappointing loss, especially when the team looked so good against St. Louis earlier in the week.

Now it's on to Nashville, where the Wild won a week ago, to take on the Predators tomorrow night. Hopefully they can get in at a decent time, get some rest, because I'm assuming more of the same chippiness again tomorrow. 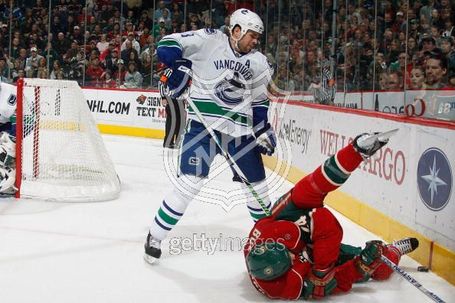 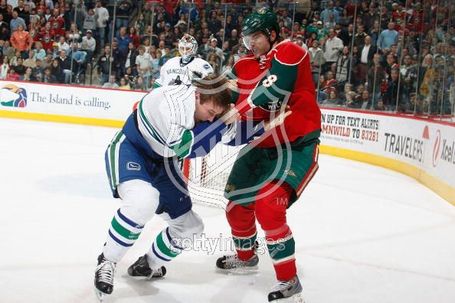 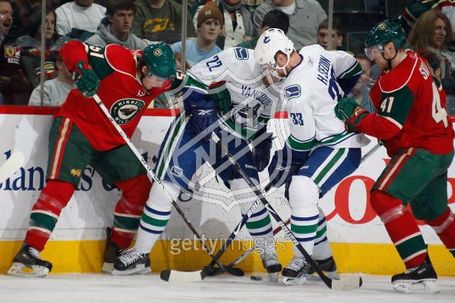