The morning after every game, we'll look across the internets and blogosphere (assuming the tubes aren't clogged) for recaps, writeups and analysis of last night's affair, both from the Wild side and the other side. 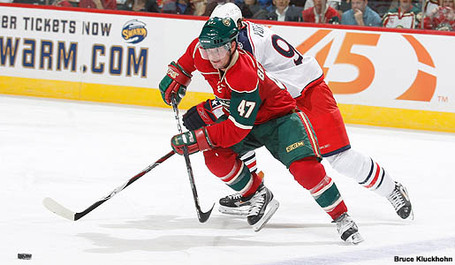 1. Benoit Pouliot was outstanding.
2. Danny Irmen, I think, was the victim of a bad call on that five-minute major boarding.
3. The Wild got to kill seven power plays tonight, including the major. It gave Jacques Lemaire the chance to look at some PK forward options.
6. Backstrom had his shutout ruined with a dubious delay of game penalty called on him.
7. The Wild cut five junior kids tonight during the game. It’ll be announced in the morning.

"[Pouliot] had good energy, he was on the puck," coach Jacques Lemaire said. "Hopefully he's going to keep going on the same track."
Pouliot played in every situation: "I got a little power play, a little penalty kill, a little bit of everything. I felt good out there the whole game and hopefully I can keep it going."

In a game in dire need of something pretty, Benoit Pouliot came through in the clutch.

The rookie center's third-period goal was both beautiful and timely, serving as the game-winner and an aesthetic respite from a game that moved in fits and starts because of a zealous officiating crew.

Pouliot has been penciled in as the team's fourth center, but pencils have erasers, and Wild coach Jacques Lemaire still wants to see the 2005 first-round draft pick earn a spot in training camp. Well, Lemaire liked what he saw Wednesday.

"I'm happy to see what he did. Hopefully, he's going to keep going on the same track."

If Pouliot stays on the same track, it's going to be hard to keep him on a checking line. He's a skilled skater and puck handler with size: 6'3" and 200 pounds.

Long before the puck dropped last night, the Blue Jackets knew they were facing quite a challenge.

That they lost only 2-1 to the Minnesota Wild could go down in some circles as a moral victory.

"I thought we had bus legs early, travel legs, whatever you want to call it," coach Ken Hitchcock said. "But we really came on in the second and third period. We know what we had in the lineup. We're evaluating, and we got a very good effort from just about everybody."

The Wild played its exhibition home opener with 14 regulars in the lineup, a little thank you to the fans who have supported them with nothing but sellout crowds since 2000. There were 18,064 on hand again.

The game, in one sense, reminded me of a lot of games in Year 1. Look down there in the corner, there’s Trevor Frischmon battling with Owen Nolan. Over here we have Jonathan Sigalet going toe-to-toe with Mikko Koivu. The Blue Jackets were severely overmatched on the scoresheet, but they played a plucky game. The Wild had 13 regulars in their lineup; the Blue Jackets 5. I kept going back to 2000-01, when Keith Tkachuk would school the likes of Jan Caloun.

Feel free to add your own links, articles, videos and quotes as well in FanPosts and FanShots as well as the comments!