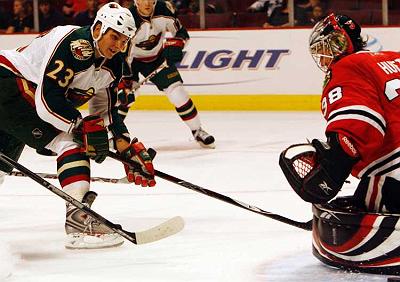 After an outstanding first period, the Wild found themselves with a 3-0 lead. Apparently they then decided to do a bit of scoreboard watching of the Twins game and the White Sox battle with Cleveland, because they certainly weren't playing hockey anymore.

My initial thoughts last night were that Reitz was going to get an earful from Jacques Lemaire, for sloppy play in his own end, a cardinal sin in Lemaire's system. Shockingly, I wasn't wrong.

From the Star Tribune:

Reitz was a minus-3, particularly playing pivotal roles on the Blackhawks' first and fourth goals.

"It starts by him wanting to freeze the puck on the side of the net," said coach Jacques Lemaire, referring to Reitz trying to pin the puck under goalie Josh Harding moments before Andrew Ladd cut Chicago's deficit to 3-1. "You've got to learn. It's experience. You know, you've got big guys there. You got a stick and try to hold on to the puck, it's not happening. Too many big guys."

"He's got to work, even if he would be on the team, he's got to work to play," Lemaire said of Reitz. "I'm going to play the best guys. That's it. Some of the guys, they have to realize, it's important these games. It might not seem important, but it is important because I'm watching them.

"I mean, I had a feeling at a time, maybe I'm going to bench a couple guys."

1. Typical Jacques Lemaire. The coach completely disagreed with the Danny Irmen board the other night. He wanted the kid to know it, so he not only decided to give him another shot tonight, he put him in the starting lineup. Well, you can bet Irmen earned another exhibition game. Lemaire praised his play bigtime after, the way he skated, his effort, etc.

3. The Wild could have made this a rout early, but after it took a 3-0 lead, Lemaire gave power-play time to every single skater on the team. That obviously wouldn’t have happened in the regular season, so take this game with a grain of salt.

4. Proof that the plus-minus sometimes is a meaningless stat? Gillies was a minus-3 tonight, and he was solid. Lemaire pointed that out, too.

Looks like I was wrong on Gillies last night. These things happen when you're relying on the radio broadcast for your analysis.

Notes from the other side

The Blackhawks' first-round draft picks have established themselves -- with one exception.

Jack Skille got a great chance to make his case Friday night, when the Hawks whipped the Minnesota Wild 4-3 in their second preseason game before 18,034 at the United Center.

Unfortunately, there's not a lot of coverage in the Chicago press for the preseason. That's a bit disappointing. Hopefully once the regular season begins, that will change, because this young team is full of talent and should be a major factor in the West.