Share All sharing options for: Minnesota Wild @ Buffalo Sabres - The Morning After 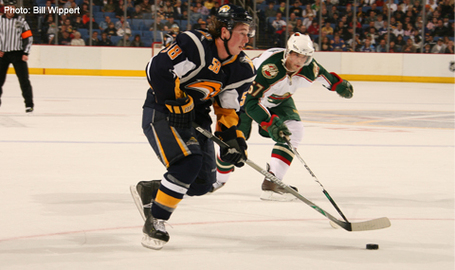 Not a lot of intrigue or offense in this one. A thought seconded by shootout winner Andrew Brunette:

"Not a lot happening," Andrew Brunette said after.

I would say that is par for the course in many preseason games. However, the Buffalo Sabres buck the trends of the "revenue at all costs" professional sports scene.

The Buffalo Sabres have it right. They don’t charge full prices for exhibition games. Apparently, lower bowl tickets are reduced to $35.

Most teams charge regular prices, which is not fair. Preseason games are often slop, and this one certainly was.

Russo further outlines why exactly the Wild had so much trouble developing any offense:

The Wild had a particularly difficult time getting out of its zone and generating any offense. Of course, five of its most skilled players were back in St. Paul - Gaborik, Burns, Bouchard, Zidlicky and Koivu.

While I'm guessing this isn't exactly a trend, and it's obviously a small sample size, but apparently Backstrom looked good in the shootout

In overtime, Niklas Backstrom was tremendous, making five saves, four on a Buffalo power play. He made 28 in all and drew big praise from Jacques Lemaire: "He was very solid. You could tell. He was in control, which I was happy to see." In the shootout, Backstrom, and his shootout troubles are well-reported, was again solid, making three saves.

Tyler Cuma got his first ice time, partnering with Kim Johnsson, hopefully the youngster learned a bit about positioning and breakouts, but apparently had no issues with butterflies or feeling the pressure.

Tyler Cuma was so poised, it was ridiculous. He’s 18, and was solid in every way. Only thing that didn’t go his way were two shots, one when he broke his stick and the other when he swung and missed. But defensively, he was outstanding with Kim Johnsson. You can read more about that in tomorrow’s paper, too.

Coach Jacques Lemaire called Cuma and Johnsson the Wild's best pair and said of Cuma, "You could see all camp, that's exactly the way he was playing."

"I came into camp and really wanted to work hard and show them what I have," said Cuma, who is from nearby Bowmanville, Ontario. His parents, stepparents and siblings got to make the 90-minute drive to watch him. "For the Wild to give me this opportunity, what more can you ask for?"

"This guy could be a really good matchup defenseman," said Wild assistant GM Tommy Thompson, who scouted Cuma 11 times last season. "He's not really big, but he's really quick. He's a tremendous backward skater. [The opponent] goes from 'A' to 'B,' Tyler's on 'B' before 'B' gets the puck."

"I had been skating for five days on my own, just trying to get some movement and conditioning and sprints," Gaborik said. "Just trying to make sure everything feels fine. And so far, so good."

The Wild has two home exhibition games this week, and Gaborik is hoping to play in one. "It's always good to get some preseason games under the belt," Gaborik said.

From the Buffalo News

"I thought the team was good tonight," coach Lindy Ruff said. "I thought we really didn't give up anything the last 25 minutes except for a tough bounce, which was about the only opportunity they had in that period."

Up next: Tuesday night, the Chicago Blackhawks visit the X.