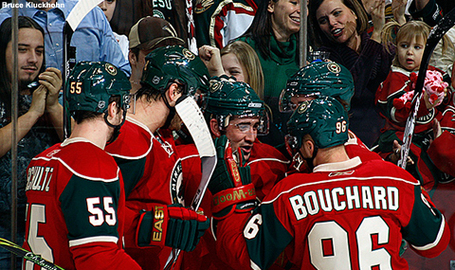 How? How on earth has this team scored 11 goals (10 even strength) in two games? I mean, I understand that it was Phoenix and Edmonton, but even against the worst teams in the NHL, the Wild offense has been anemic for months. Tonight it was Kolanos, Clutterbuck, Bouchard, Burns and Belanger. The goal-scorers aren't scoring right now, but the energy guys are proving to be assets and finally getting the goals they deserve. Combine them with the great offensive help from the defensemen (Burns, Zidlicky, Bergeron) and they are picking up the slack right now as Koivu and Brunette fight whatever has been affecting them.
Pierre-Marc Bouchard finally got his game back on. His goal was a thing of beauty, and his linemates finally took advantage of his excellent playmaking. If he can continue to play like this, the guys on his line will continue to score. They just need to focus and work hard. It'll come.

How will the Pouliot situation affect the kids? Kolanos has taken advantage of his chances here and has proven that he can't be held back anymore. Let's hope he doesn't get complacent and instead continues to provide that spark from the energy lines. Veilleux has done what he's asked to do. Colton Gillies needs to get in the flow of the games now that Pouliot is back in Houston. James Sheppard needs to look at Benoit Pouliot and understand that if he doesn't produce and doesn't go hard every shift of every game, that he too will be heading back to Houston.

So, with the $2MM in cap space now with Pouliot gome, what will Risebrough do? Bring in scoring? Move Gaborik for someone? Re-sign Backstrom? What would you do with it? 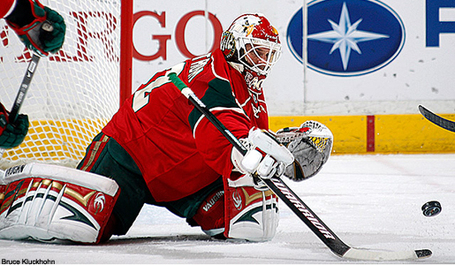 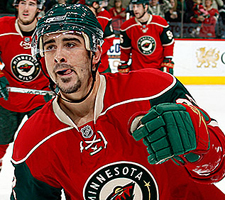 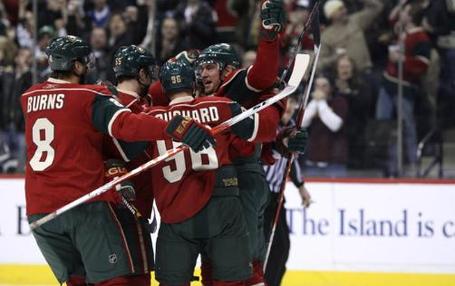