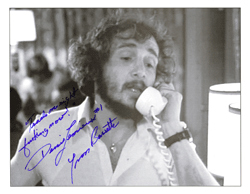 In the immortal words of Denis Lemieux, "Trade me right ****ing now!"

James Mirtle discussed the concept of re-signing or letting Backstrom walk previously. At the time, I was definitely pro-signing him. However, as the team gets further and further mired in the chase for the last playoff spot, we look to Houston and see that there is nobody primed to come up and make a big impact, nor is the Wild's young talent performing anywhere near expectations.

Goaltending wins championships. However, with limited offensive talent, few prospects in the wings, and a system that seems to elevate defensive and goaltending stats, can the $7 million for which Backstrom is reportedly asking be better spect elsewhere? I mean, if Henrik Zetterberg is worth $6M/year and Alexander Ovechkin is worth $7M, do we really think that Backstrom is more valuable to the Wild than Josh Harding by that level of magnitude? Why not take the cap hit for Backstrom and use it to sign two or three actual offensive talents?

Of course, we first need to look at potential trading partners. The most obvious are Detroit, Washington or Chicago as a rent-a-player for the playoff run. All three of those teams are in dire need of goaltending help to push them through the Stanley Cup playoffs, and would have the cap space following a trade. However, who would be potentially coming back this way? Draft choices would be low because these teams are going to end up in the bottom 1/3 of the draft order. Detroit's talent is older than what we would want, and they're not likely to part with Franzen or Holmstrom. Chicago has young talent, but they've made their way this year because they have the right pieces in place on the offensive side of things. Maybe pairing Backstrom with Johnsson or Bouchard could get someone like Martin Havlat or Patrick Sharp, but that's unlikely, because then Chicago is without two of their top scorers. But it would be nice to get some mid 20s proven offensive talent on the roster.

Now, a guy like Backstrom would normally be tough to replace, but the Wild haven't had a problem with goaltenders stepping into the #1 spot and performing well. In fact, in limited exposure, Josh Harding actually has better numbers this year than Backstrom

Yes, I understand that it's only 10 games, and for the most part Harding is an unknown commodity, but if you go back and read Mirtle's article on the Wild goaltending, every goalie the Wild have had has been able to jump in and perform well. Harding's time has come.

This is scary for many to think about, but this team needs a shot in the arm, the front office needs to take a stand. There are too many people underperforming their contracts around here, and it's time for some dead weight to be jettisoned along with the only tradable commodity the Wild have.

Players making more than $6 Million. Who here would you not rather have than Backstrom?