I'm going to keep it simple since I haven't been around here in a little while.

I could ask you to insert a joke about being bored with a boring team, but the Wild just lit up the Maple Leafs 6-1.  I'll put that joke to bed for now.

What's got me though is the state of flux the front office of the Wild puts you fans in.  It's maddening to see - let's recap the big ones:

Burn Mary-Ann At the Stake!

We have to get Backstrom re-signed now!

Trade him so we can get something in return!

I get it, you guys are frustrated that is only consistent at being inconsistent.  I've got a new rallying cry for everyone though, and it's one that I know you can all support and it's one that you might start saying come this offseason or after the trade deadline, depending on how things go. 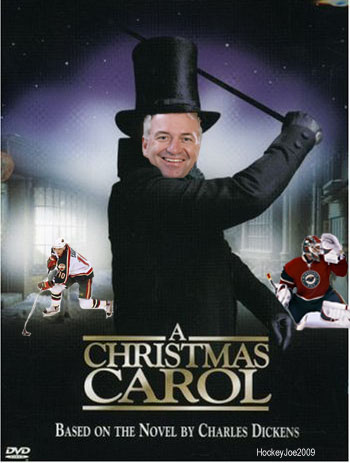 That's all well and good but in the Western Conference, survival is only part of the game.  The West is wide open for the playoffs.  Fans from all over the place are in full panic stricken mode because one cold snap buries them in the standings when they know one hot streak can vault you into a spot where you can avoid Detroit and San Jose in the first round.

Here's where Risebrough and a lot of folks in the Wild front office differ on things.

Some teams look at the playoffs as a time where they can shake things up and make a name for themselves.  The Sharks did it back in the mid-1990s as an expansion team when making it to the playoffs wasn't quite good enough.  So they won the opening round a couple times as an upstart team.  Now?  Making it to the second round is a bitter pill to swallow because too many of their seasons have ended there.

The Wild front office and a lot of the fans still view making the playoffs as an accomplishment, something to hang a banner for.  The Wild aren't a low-level NCAA team that's just happy to be there - at least they shouldn't view themselves that way.  They're a professional organization whose ultimate goal is the Stanley Cup.

Under Doug Risebrough's watch, making the playoffs has been made the struggle and the accomplishment to hang the hat on.  In a division that was ruled by the Avalanche for many seasons and is now left up for grabs, how have the Wild not stepped forward to seize the throne?

Easy.  Risebrough treats the team like one scrounging for every penny, like they can't keep up with the big spending Joneses of the NHL.  Someone forgot to tell Doug that those days are over and that overspending for mediocre talent in a cap era is a good way to put the team on the super highway to status quo.  Someone should have Risebrough  take a look at the crowds that come to Xcel each game too, the Wild front office crying about finances is bogus and all of you that spend your money on them know this.

Winning helps change the mindset in a city and with its players and when a team sets their goal as scraping by to make the playoffs each season...well, you can understand why top flight talent might look somewhere else than St. Paul, Minnesota.

I know folks are looking on envious at what Ken Holland does with the Detroit Red Wings and a lot of that is helped by incredible scouting and proclaiming each year that winning the Stanley Cup is the only satisfactory goal, and a goal that has been and can be attained with that team.

The Wild aren't an expansion team anymore and they've seen deep success in the playoffs once before.  Was it luck that they made the Western Finals in 2003?

Correct answer is:  It doesn't matter how they got there.

What matters is that they got there and weren't able to capitalize on that.  They haven't been able to grow and gain from it and the same guy has been in charge of running the ship the whole time.

It's now more than five years since that appearance in the Conference Finals and how have the Wild done since then?

The bar for success disappeared here and somehow the mindset of being an "expansion team" returned with it after the lockout.

How did this happen?

The fans deserve better here and having Ebeneezer Risebrough mind the shop while others are able to build and grow and be shrewd yet brilliant is insulting.