If you follow the Wild, you live and die by the words of Star Tribune Wild beat writer Michael Russo. We are fortunate enough to have one of the best beat writers in the NHL covering our squad. And I was lucky enough to get 20 minutes of his time this morning as he was headed to the X. I'm hoping I didn't make too big a fool out of myself and get a chance to speak with Mr. Russo again once the season is underway.

Hockey Wilderness: What is different about covering this regime compared to Lemaire/Risebrough?

Michael Russo: I loved dealing with Jacques. He was outstanding for what we need. Joked around, had fun. I had a lot of respect for him. I respect Todd too, don't get me wrong, but there's a feeling out process here. Jacques was brutally honest. Ask him how a guy played and he was straight with everyone. Sometimes he would tick off the player. Todd will very rarely rip a player. Monday night, I had to ask about Kim Johnsson playing terribly. He wouldn't insult my intelligence by denying it, but spins it into a positive.

I liked Doug. Doug was great talking about players, but wouldn't talk about moves, rumors, etc. Chuck's much more transparent. I have a great working relationship with him, going back to 1995 in Florida, where I covered 7 of his 9 years there.

Who has been the best quote you've covered?

Jeremy Roenick, Brett Hull were always fantastic, though I never got a chance to cover them extensively. Of the guys I have covered, Mark Parrish, Len Barrie, Ray Whitney, Mike Sillinger, Olli Jokinen were always great. Currently Eric Belanger is brutally honest and a great quote. Derek Boogaard and Brent Burns are hilarious. Brian Rolston was great to deal with and rarely spoke in cliches, which is always nice for a journalist.

From a journalists perspective, what's the major difference you've seen pre and post-lockout?

Before the lockout, you had to really work sources to get info on a contract. Now it's an email away. With the cap, teams want you to be accurate with what you write. No GM wants it out there that they have $8M of space when it's really $1.2.

As far as the on-ice product, it's just 10 times better. Gone is the clutch and grab of the Roger Neilson and Doug MacLean-era Panthers. It was ugly, but successful. Now, we've evolved past that.

What has been the most fun you've had covering a team?

It's gotta be that 95-96 Panthers team. Shocked the world, went to the Stanley Cup. That was the year of the rat. Florida was playing in the decrepit Miami Arena, and before a game there was a rat running across the locker room. Scott Mellanby winds up and takes a slapper at the rat into a wall, killing it. He then goes out, scores twice and John Vanbiesbrouck calls it the "Rat Trick". Well, you've all seen the YouTube videos of thousands of plastic rats raining down onto the ice. There are great shots of guys like Barrasso hiding in the net from the rats. That was a special season and the most fun I've had covering a team. 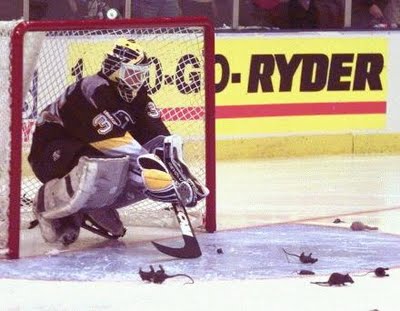 Winter Classic, Yay or Nay? If the Wild were to get one, would you want to have it held at TCF Bank Stadium or Target Field? Who would you choose to have the Wild play?

I'm for it. I haven't been inside Target Field, but TCF Bank Stadium is a great environment, and with that open end would be a great place for it. If it were me, I'd pick Vancouver because there's a hatred there.

What is still the biggest unanswered question for the upcoming season?

Boy, there are so, so many. But the main one is will they be able to turn the switch and be consistent in the new system? They did it in bits and pieces. There were 5 minutes stretches against Philly that were really fun to watch, but they gave up 39 shots and 35 quality chances. They can't do that and be successful.

Who is your impact guy?

[Brent] Burns is the guy who is going to be key. He looks like he's going to be extraordinary in the new system. He shouldn't be unheralded, but Greg Zanon is a fantastic signing. Now he isn't going to score 14 goals like Marc-Andre Bergeron, but he's going to block 300 shots and be the guy on the ice at the end of the game. He puts his body in harms way night in and night out, and risks injuries. If he stays healthy, he will be a rock solid defender.

We've heard that Josh Harding is going to get more time this season. Is that to showcase him for say ... Chicago? What kind of player/pick/prospect can we expect for Harding?

They could've traded him by now for picks and prospects. What they're hoping for is a team like Chicago or a true conteder to suffer an injury and need a goalie. There's no rush right now though. He's too precious an asset to give up for nothing. They would love to turn him into a scorer, and that's the way I see this going. That being said, he isn't an unrestricted free agent after this season, so they can still take their time and get the best deal possible.

Versus v. DirectTV. Whose fault is it?

I don't know whose fault it is, but its gotta get fixed. It makes the league look amateur. It needs to get resolved and Comcast and DirectTV need to get it taken care of. Both are NHL partners and the league may have to step in. You can't have your national partner on Satellite.

Is this a rebuilding team?

This is a better team than last year. They missed by 3 pts, added a perennial star in Martin Havlat, added a 25 goal guy in Petr Sykora. This is a transitional year. The problem is that everyone else got better too, and has better, younger talent than the Wild. If this were a Lemaire team, in that system, they'd make the playoffs. No knock against Richards, but it takes time to install a new system. I've covered a rebuilding team. This is definitely not a rebuilding team. I disagree with anyone who says this is a rebuilding year or that last years' team was better. This is a team that has to learn a new system, has a horrible road schedule and is in the hardest conference. Next season, they're in the playoffs. Houston will be a better team this year too. They have more NHL experience. They have guys like Andy Hilbert, Colton Gillies, Petr Kalus, Craig Weller, and those guys who are ready to come up will be able to produce, and remember this was a team that was a round away from the AHL title last season. Fans will have to be patient at the beginning, but this is a year in transition, not rebuilding.