Wild vs. Blues with my wife, my friend and Scut Farkus

Share All sharing options for: Wild vs. Blues with my wife, my friend and Scut Farkus 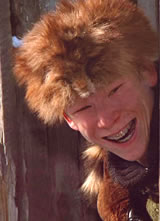 Now and again, a smash hit, cult classic Christmas movie crosses paths with everyday life. The day after Christmas, this occurred for me, my lovely wife, and my buddy David. It only took a few minutes after puck drop to realize that we not only had an annoying kid, in the dreaded "know-it-all" age range sitting behind us, but that kid was Scut Farkus. However, instead of terrorizing Ralphie, Flick and the lot in "A Christmas Story," this little squirt was ready to drop bombs of harassing knowledge upon all of those around him. To make matters worse dear reader, the kid was about 12-14, he had red hair, braces, and had the general irritating disposition of Scut Farkus. Now, being I am damn near thirty, I determined that playing the part of Ralphie, and beating the living crap out of our own personal Scut would be a very bad idea. However, through the "pen is mightier than the sword" mentality, I have some of the jewels that Scut bestowed upon us. Please read, enjoy, and imagine sitting the entire Wild vs. Blues game with these, and many other jewels coming from a row behind...

If the goalie stops it, it’s a shitty shot.

Knock him on his ass!

Fight already! That’s the whole point of hockey.  Push them into the glass and make them die!

Minnesota is the worst team in the NHL.

They’re not even trying! They don't try...at all!

He passed the ball to him and he hit the wall.

SHEADAHIM! (I have NO clue what this was, nor what Scut was trying to say)

They’re not even trying!

You are not supposed to catch it! Let it bounce!

We have a good defense.  I’ll tell you that.

Nick, there are no penalties for people killing each other in hockey.

What a horrible pass!

All you gotta do in hockey is kill each other!

Gophers don’t have a hockey team.

All you have to do is punch them! It’s that easy!

Kick him! In the balls!  So he doesn’t have any! If he even had any before!

My God, you gotta hit him, retard!

Why is he using the damn whistle? Keep playing idiots. (the puck had just gone into the stands)

Get ‘em out of your way!

Why do they use the wall?

They lose the puck so easily.

Why do they keep hitting the ball into the wall? The goal is down there morons!

Hockey is a brutal sport.

I hope you enjoyed a brief sampling of Scut's preaching. I leave you with the one thought that ran through my head the entire game...Where the HELL are the parents of this irritating kid???