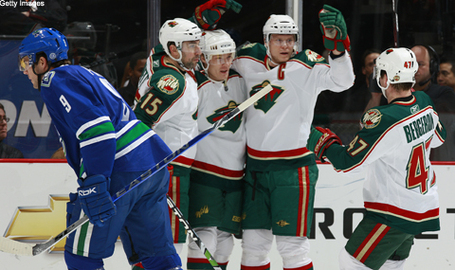 Well, this was a bit of a tale of two games. In the first half, the Wild dominated play, getting two quick goals and controlling the flow. First was MIkko Koivu on a nice backhander down low, then Marc-Andre Bergeron on a nifty play from a great pass from Pierre-Marc Bouchard. Luongo looked prime for a meltdown, and the crowd had turned on the home team. Then, as they sat back a bit, they allowed the Canucks to get back in the game. First on a goal by Ryan Kesler (where I still contend he kicked it in). Then, after a bad game misconduct call on Cal Clutterbuck for boarding, the Canucks took over. It was all Vancouver from that point forward. They dominated play, had a 2 to 1 edge in shots, and took the body on the Wild the rest of the night. After Edler rifled home a power play goal in the third period, the Wild started to bounce back a bit with the score tied.
Unfortunately, after Eric Belanger's goal, the Wild went into a defensive shell, and Vancouver just kept making rush after rush after rush. The Wild tried to get physical, but the Canucks kept powering through. Then, with the Canucks on the power play, from a tripping minor on Brent Burns, Luongo took off for the bench, and Vancouver went 6 on 4. The WIld have had trouble this season defending the extra attacker, and it felt inevitable that they would tie it up. Ryan Kesler made no mistake about it, banging home a rebound over a sprawling Niklas Backstrom with 15 second reminaing in the 3rd. It felt as if all hope was lost.
Luckily though, Daniel Sedin took a bad penalty in the OT, and on the ensuing power play, Marc-Andre Bergeron wound up on a 2 on 1 and missed the pass. Thankfully he had another chance a few seconds later and drilled home a rocket, earning the two points with his second goal of the night. It feels good to hand the Canucks their 8th straight loss. 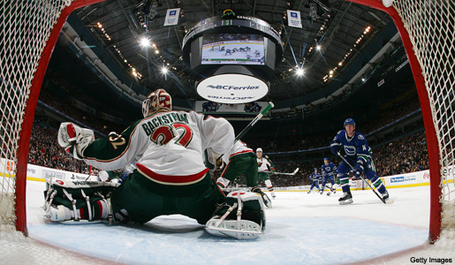 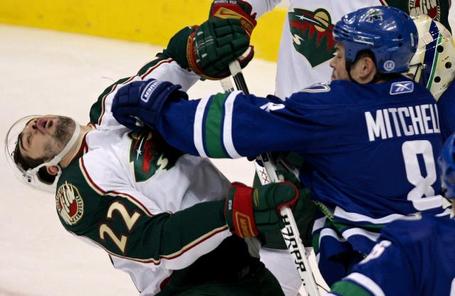