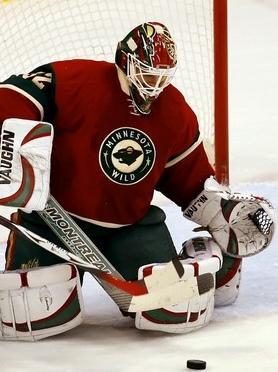 It is early in the post butt spanking Ottawa just laid on the Wild, and it still smarts a little. That said, I'm moving past it. It's just who I am. So, we take a look at Russo's notebook for tomorrow, and find that Backstrom is not happy about being crashed into after he has the puck.

I don't know how many people read this blog, and I have no idea how many of those people have ever been a goaltender. For those of you who are uninitiated in the wonder that is a 200lbs guy crashing into while you are crouched over trying desperately to cover a little rubber disc... it is less than fun. To have your defensemen stand back and watch as it happens, even better.

It makes the high stick Backs gave McCleod the other night all that much more explainable. When I was goaltending I was told to defend myself if the d-men weren't going to. More than once I gave a good blocker to the face, back of the neck, back of the knee, where ever I could reach. I gave a good slash every now and again too, and let me tell you something, more times than not, it worked.

In the NHL it should be different. The goalies should NEVER need to defend themselves, never. That is why these defenders get paid multi-million dollars. That is why they pay the forwards to retaliate and crash the other net. I hate to do this, but it is much like hitting a guy with a pitch in baseball. You know as the first batter going up the next ininng that you're going to get plunked too. Makes you voice your opinion a little louder the next time your guy wants to hit a guy.

Now, here's a quote from a guy I have a ton of respect for, Nick Schultz.

"It's hard," Schultz said. "You don't want to take a penalty if they're not calling one on them. But they've got to know that they can't come in and hit our goalie. That's something we have to make sure that we as a group protect him and make sure that he's not getting hit.

"As a goalie, he's got to feel comfortable in there that he's safe and not going to get run over. It's up to us guys looking out for him and taking care of him."

I like the second part of the quote. I absolutely detest the first part. You are right, you don't want to take a bad penalty in a close game, but how many times do think guys are going to crash into Backs if you and Burnsy knock them on their ass after they do it? How many times is McCleod going to fly in fall on Backs if the first time he does it Owen Nolan breaks his nose for doing so?

The answer to both questions is simple: not many.

Take the penalty in game one of the season. Take it again in game two. Take it in games three, four, and five. Take it in every situation, every single time. Then, the opposition will think twice about running him when the chance comes up.

Right now, after game 55 is in the books, the only way to level the playing field for the rest of this season, and to set the tone for next season (and yes, you need to set that tone now), you need to send Nolan into a few opposing goalies. You need to send Clutterbuck flying into Budaj or Kipper. Take the penalty. Make it clear why you did it too. Then, when they come to retaliate against Backs, knock them for a loop and then when they stand up, give 'em a good old fashioned beating.

Protect your goalie. He has carried your sorry butts through more games than I can count this season. He is the only one who has showed up (seemingly) every night. He deserves your respect, and he deserves the respect of opposing players. The only way he will get it is for you and your teammates to man up and hit a couple guys after the whistle.

Until you stand up for your own, and crash a few of the others, you will lose more games than you win, and you will lose the respect of your goalie, your opposition, and your fans.