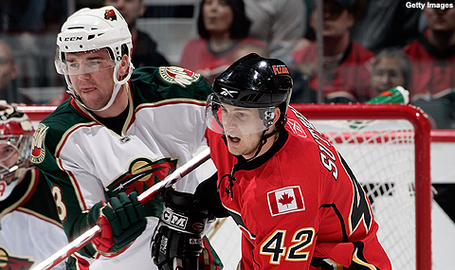 This Calgary Flames team absolutely owns the Minnesota Wild, especially in Calgary. All night long, you felt that Calgary just waited for their chance, scored their goals, and went back to batting away an annoying bug. Never in fear of any damage.
This team was absolutely terrible tonight. The offense was anemic. The guys couldn't take the body. The passes were not crisp, the power play was a joke. It was like they were in slow motion all night long.
I'm so disgusted that I don't even know what to say. If the rest of the road trip goes like this, it's not going to matter if they are buyers or sellers. However, tonight should have proven that the Wild need to either sell a lot, or buy offense in a big bad way.
Oh, and Dion Phaneuf is a hack and should be shot.