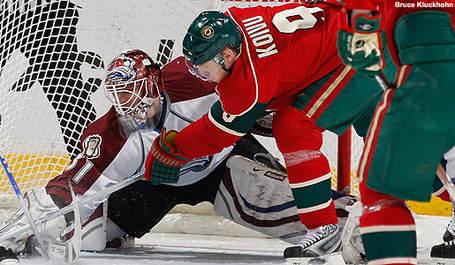 These are the games Minnesota desperately needs to win if they plan on getting to the playofs. For almost 10 minutes of the second period, the Wild amassed 1 shot on goal. Needless to say, you can't win if you don't shoot the puck.

The Wild played their typical first period, a lot of back and forth, with nobody really getting the upper hand, then in the second, Cody McLeod got the Avalanche ahead by deflecting a Ben Guite shot up over Niklas Backstrom's shoulder. Less than two minutes later, Stephane Veilleux deflected a great shot by Martin Skoula past Peter Budaj. Ryan Smyth took no time in getting the Avs the lead again, as he deflected a Wojtek Wolski shot past Backstrom. Smyth's goal was 2:46 after Veilleux's goal.

The two teams traded chances throughout most of the 3rd period, and after a late bad power play, all looked lost for the Wild until Dan Fritsche saved the puck from sneaking over the blue line, fed it to Eric Belanger on a nifty give and go before Fritsche passed it to a streaking Nick Schultz. Schultz drove to the net and buried a great shot over Budaj's shoulder, tying the game with 1:46 remaining.

Then into the overtime, the teams traded a shot, both looked to be waiting for the shootout. The Wild played a risky game, as they had to face shootout king Wojtek Wolski. Wolski did not disappoint, but Milan Hejduk and Marek Svatos did. For the Wild, Mikko Koivu proved to be up to the task, Pierre-Marc Bouchard was stuffed on a nice move by a great save for Budaj, but the goaltender had no chance as Marek Zidlicky roofed it to give the Wild a much needed two points. 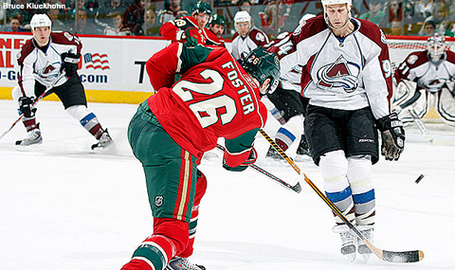 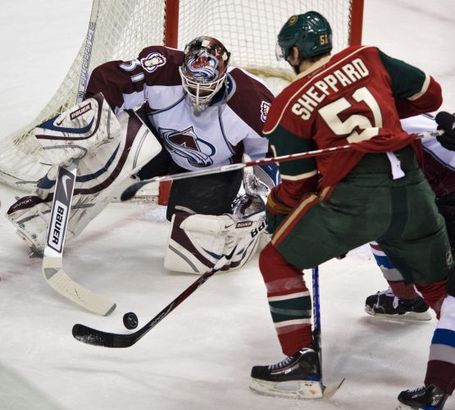 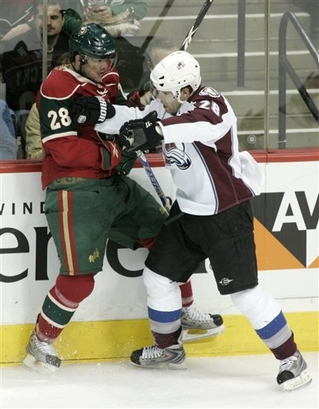