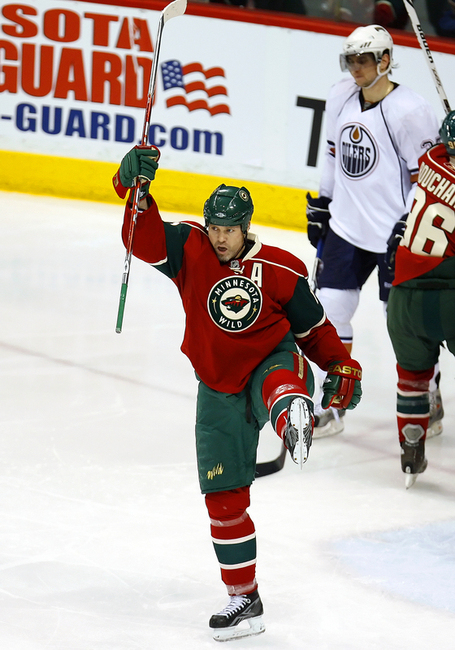 After the first period Minnesota Wild fans must have been thinking "here we go again." The WIld found themselves in a scoreless tie, but had been outshot 15-2. The second period was an entirely different story. Once again the Wild applied pressure on the opposition, with 6 shots in the first three minutes only to be foiled time and again by Dwayne Roloson, doing his best Martin Brodeur impression. However, the curse of the Wild was on Roloson as he was finally beaten by Owen Nolan with a nice garbage goal created by traffic in front of the net. Dan Fritsche and Nolan were camped in front of Roloson's crease when Fritsche took a whack at a bouncing puck that fell into the crease and Nolan buried it for his team-leading 21st of the season.

The second period would end with the Wild up 1-0. However, the Wild amassed 23 shots in the second to Edmonton's 12 to make it 27-25 in favor of the Oilers.

When the teams too the ice for the third, the Wild picked up right where they left off, pressuring the Oilers in their own end with an aggressive forecheck, and at 4:19 of the third period, Owen Nolan dumped a puck into the zone, chased it behind the net, made a nifty backpass to James Sheppard then curled, uncovered, in front of the net. Sheppard then made the best pass of his NHL career right to the feet of Nolan who one-timed it past a helpless Roloson. It was a horrible defensive play, coupled with a great pass by Sheppard and Nolan's excellent hands.

With the 2-0 lead the Wild continued the offensive pressure, and Stephane Veilleux went in hard on the forecheck, forcing an errant pass, bouncing off the back skate of an Edmonton defender and into Roloson's net, putting the Wild up 3-0 and icing the game. The Wild tried valiantly to get Nolan his first hat-trick of the season after three 2-goal games, but the grizzled vet couldn't get the lucky break needed.

The win was nice, but the real storyline was the return of Marian Gaborik. In 17:43 TOI (third on the team for forwards) Gaborik drew three penalties, had 6 shots on goal, made a few nice plays, didn't get on the scoresheet, but looked solid in his first game back. Look for him to get more and more accustomed to contact in the next couple games. It's nice to see #10 back on the ice. 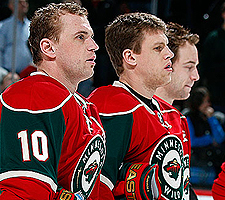 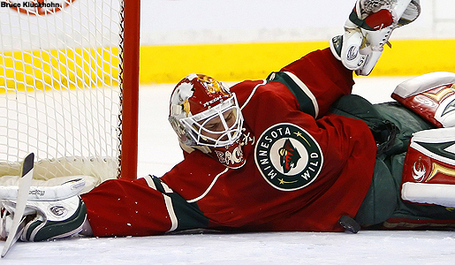