Share All sharing options for: Minnesota Wild @ New York Rangers: The Morning After 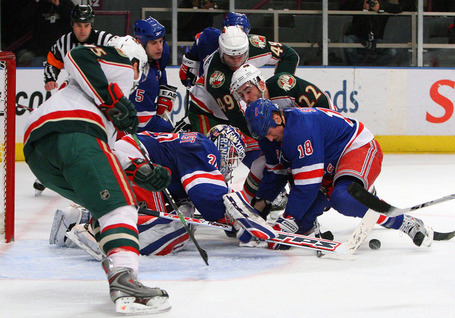 
You can't win when you get only 10 shots in two periods, are outshot 30-19 and win only 19 of 54 faceoffs. It's that simple. The fact that they only lost 2-1 shows how bad the Rangers are too, and how good Backstrom was tonight.

The Wild looked absolutely lost without Mikko Koivu, and with no Brent Burns, Derek Boogaard or John Scott, Sean Avery and Colton Orr took liberties with Niklas Backstrom and the rest of the undersized Wild.

The Wild had nearly as many fights in the first period as shots (3 shots, 2 fights). They certainly cannot win if that's the way they're going to continue playing.

Someone needs to step up with no Burns and no Koivu. Entirely too many shots from outside and from sharp angles. Not a good way to get the playoff chase underway.

Kim Johnsson was absolutely abysmal tonight. He was directly responsible for both goals, and Niklas Backstrom looked like he wanted to slash everyone who came within reach of his crease.

Henrik Lundqvist had none of the problems facing Backstrom. The Wild simply do not drive to the net, let alone run the opposing goaltender. If the Wild want to get into the playoffs, they need to rely on Gaborik, Nolan, Brunette, Sheppard and Fritsche to step up big. 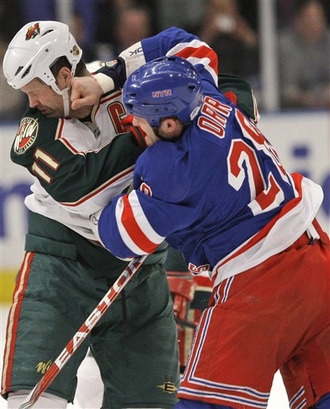 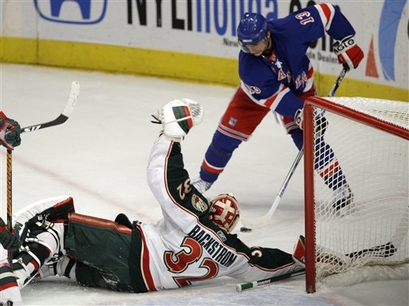 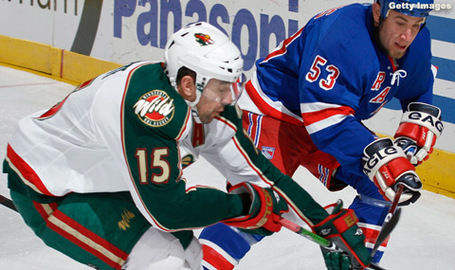