New York to the World: The Minnesota Wild are boring

Share All sharing options for: New York to the World: The Minnesota Wild are boring

It seems as if some members of the hockey had just experienced the Jacques Lemaire-led Minnesota Wild for the first time last night. Of course, those of us who aren't stuck with listening to the morons on the east coast have known for years what they are apparently only now realizing. The Wild are boring.

Of course, once they play at Madison Square Garden, then the team is finally worth talking about.

Heck, even a man of God hates the Wild! How much do you have to suck to have a pastor of St. Matthew's Evangelical Lutheran Church of New Milford, NJ call for your head?

Take it away Reverend Iovine

I read somewhere Lemaire is considering retiring at the end of the season. He should quit now. Why? This guy is ruining hockey.

His coaching style sucks the life out of everyone - players, fans, the poor slobs calling the game, the beer vendors, etc. Please, I beg the brain trust at Versus and NBC — never show another Minnesota Wild game until Lemaire quits.

Mark Hermann of newsday.com believes the only reason the Rangers are boring is because of the team they're playing. Yeah I doubt that. After all, even you pointed out that the Rangers are marginally more offensive-minded than the team you despise.

A game against the Wild is something to be endured, like a headache. Watching the Wild is like watching AstroTurf grow.

Henrik Lundqvist [said] of the Wild, "They didn't really try to forecheck or go after us."

Dude, don't blame your teams' inability to score on the Wild. We know we are offensively challenged.

I'm just glad that our friends at Blueshirt Banter aren't jumping on the "Hate the System" bandwagon.

Oh, and don't piss off the Lemaire, you won't like him when he's angry 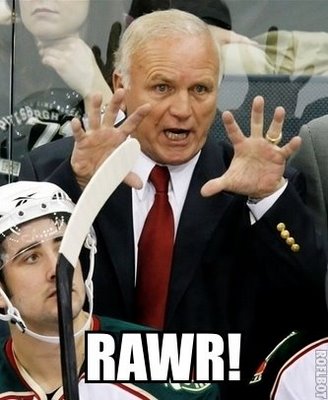