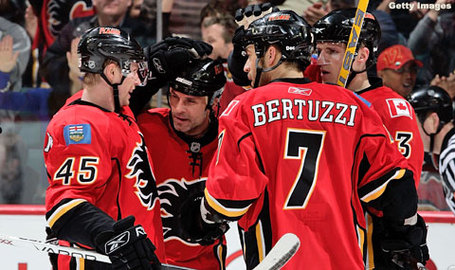 The Minnesota Wild once again went into the Pengrowth Saddledome and once again came out with a loss to the Calgary Flames. No matter where these two teams are in the standings, it never goes well for the Wild in Calgary. This season has seen the Flames atop the Northwest division, and the Wild are definitely looking up at the best team in the division.

The Wild once again lost because they simply have no offense. They were outshot 40-15, and continue to find themselves amongst the worst in the league in shots on goal and goals per game. When Stephane Veilleux leads your team in shots with three, you know you are in for a long night. After being outshot 20-5 in the first period, it was clear that the WIld are simply not good enough. They either don't have the offensive talent, or the system is simply not effective enough to win in the NHL of today.

Todd Bertuzzi, Mike Cammalleri and Jarome Iginla had their way with the Wild defense. The three of them combined for as many shots as the Wild (15), but on the bright side, only had two assists between them.

One thing that was clear from tonight's game was how much better the Flames got as a result of their actions at the trading deadline. With Iginla, Cammalleri, Bertuzzi, Jokinen, Nystrom and Lundmark in addition to Phaneuf, Leopold, Sarich and Kiprusoff, the Flames are positioned very nicely for a run at the Western Conference.

The main bright spot since Mikko Koivu went down has been the play of James Sheppard. Sheppard has really stepped up his game. He's getting physical in the corners, making smart plays with the puck, finding his touch as well as paying attention to his defensive responsibilities. I am duly impressed. The kid needs to continue playing like this through next season, and he'll find himself on the second line, and amassing the points we had hoped from him. 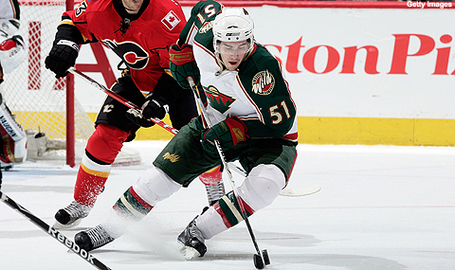