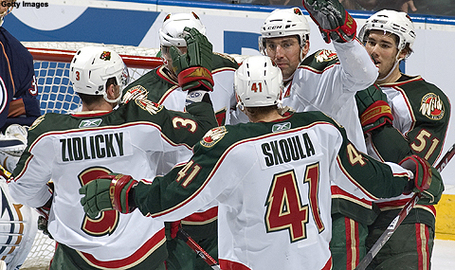 Like Kim Wilde said, you keep me hanging on.
The Minnesota Wild kept their playoff hopes alive, thanks to Marian Gaborik's goal and assist as they defeated the Edmonton Oilers 3-2 at Rexall Place. This was a big win not only because it kept the team alive in the playoff hunt, but because it ended a 14 of 17 road game swing. The Wild get to come back to the friendly confines of the Xcel Energy Center for four of the final six games. Granted, in order to get into the playoffs, they likely need 10 points from those six games, but that is doable.
This was a very even game, but the Wild got things going early, getting up 2-0 on goals from Andrew Brunette and Martin Skoula in the first period to get a jump out of the gate that was sorely lacking last night in Calgary. The Wild were again outhot 33-21, but the difference was the third period when the Wild were trying to hang on to the win and the Oilers were throwing everything they had at Backstrom, including their own players on at least four occassions.
The second period was a feeling out process, and ended up not really mattering for much, except for Cal Clutterbuck going off with some kind of a tweak to his knee. Luckily he came back out for the third period.
In the third frame, the Oilers controlled play, got within one right away as Fernando Pisani took a centering feed from Ethan Moreau and banged it past Backstrom from inside the crease. Marian Gaborik answered the bell 3:09 later with his game-winning goal, and his second point of the night as the extra attacker during a delayed penalty. It was a beautiful shot, and as mbennett said "more placement than power."  Ales Kotalik got the Oilers back within one with a beautiful one-timer past a helpless Backstrom.
To end the game, the Wild fought off the Oiler attack and kept their playoff hopes alive.
Speaking of Marian Gaborik, is there anyone left who doesn't see his importance to the team, doesn't wonder "what if" regarding the season and his health, and doesn't feel that he has shown enough at the end of the season to get himself a nice contract with someone this offseason? I implore you, Doug Risebrough, make a big offer to Marian and put your petty disagreement behind you.
As you can see, Gaborik is back to his goal per game point total. He's doing it with beautiful snipes like tonight, banging down low to score, shielding the puck really well, taking the body and getting physical. The guy is still the best player on the team, and Koivu is a distant second.
Let's hope that Marian has enough in his to get the team 10 or 11 points and into the playoffs. It starts Tuesday against the Canucks. 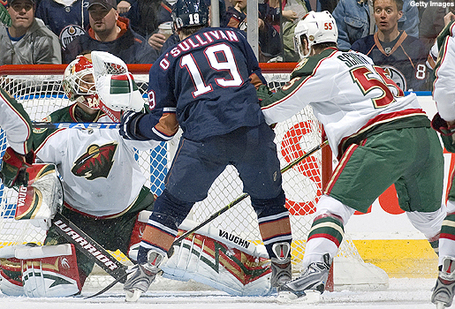