I know that the NHL struggles in competing for television ratings with poker, but in my efforts to reach out to this apparently huge market of, ahem, sports enthusiasts - I'll use a metaphor to describe today's NHL trading deadline to them.

The "river" card is about to be revealed and it's time to decide if you want to stay in this hand and go for the big money or re-group and see what the future holds for you.

Is today the day that the preparations for the 2009-2010 begin and you fold or is it time to push all in and just go for it?

It's put up or shut up time for the Minnesota Wild and they may have made a huge tell about what they've got planned for today.

Easy money after the jump. 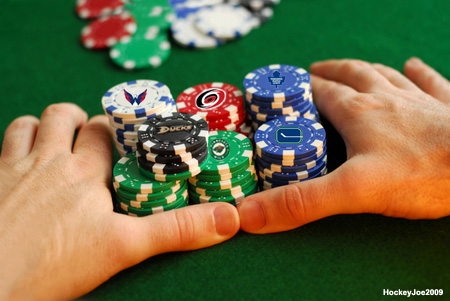 Doug Risebrough may have surprised everyone across the NHL by turning a hose on some of the sputtering rumors about goaltender Niklas Backstrom when he extended his contract for a very Giguere-like four years and $24 million.

Debate if you wish if this was the right move or not, but given Josh Harding's play of late some fans have been heard whispering about how dealing Backstrom off for what would, ideally, be a sweet trade package to a team desperate for some kind of goaltending help.

Instead by doing this now, Risebrough has tipped his hand.

Oh sure he's got a shiny potential trade piece for someone seeking a bargain-basement and oft-injured high scoring wing but the return on a deal for Gaborik would be brutal when compared to the type of talent Gaborik has.  Worse yet, Gaborik is probably going to come back to Minnesota next season to prove that he can score and that charade gets to repeat itself again next year.

By extending Backstrom, Risebrough has taken his biggest and most marketable trading chip off the table.  Nik Backstrom was Risebrough's piece to use to try and stock up the current roster with an extra scorer, or better yet, use Backstrom to help fill the minor league cupboard that he's neglected since the get-go.

That's right. Doug Risebrough has folded his hand and left the table to see what he's got left.  There won't be a big splash move made by the Wild this year, not that that's any different than any other year previously, but there was hope this year - lots of hope! 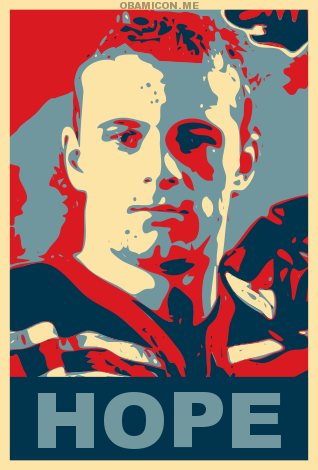 Instead, Gaborik's injury woes wouldn't go away and somehow managed to get worse and the team couldn't score to save their lives.  The barren wasteland that is the farm system reared its ugly head and when the team looked for anyone to help them step up, they just weren't there waiting for the call in Houston.

And now, today on Hockey Christmas, Doug Risebrough has already told everyone, whether he realizes it or not, that there is no Santa Claus and that if Santa did show up by 3:00 P.M. Eastern, he'd tell him to get lost because "that's not the kind of house we run here."

The goal in the Western Conference when you're one of the many teams duking it out for a playoff spot is try and find a way to stay in the hunt or to know best when to get out.

Minnesota is just one point up on the Blues yet still only three back of the final playoff spot and five points behind the sixth spot and the Blue Jackets.  St. Louis may have gotten their notice to check out last night getting humbled by Detroit.  Columbs improved their position while pretty much putting the final nail in Los Angeles' coffin.

Does Minnesota want it bad enough?  Does Risebrough dare take a risk, somehow, and finds a way to bring in a scoring forward or two?  Are any of the players currently on the roster appealing to anyone else in the league?

If history has taught us anything it's that Risebrough is more likely to stick with what he's got rather than rock the boat with 20 games to play and if he can land a depth forward at an acceptable cost, he'll do that rather than make a big splash and the contract extension to Backstrom sealed that fate.

Risebrough is no Phil Hellmuth nor is he Mike Matusow and he's certainly no professor at poker like Howard Lederer.  Instead, he's left the table, cashed in his meager stack of chips and headed home to tell the kids to go to bed because he's got a fat guy in a red suit to chase off the property.