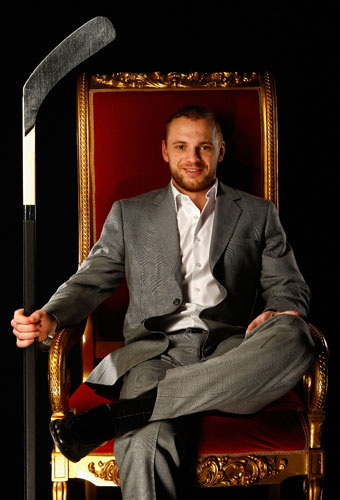 For those of you out there who have not rejoined the Gaborik for King campaign, I give you this, a post from Mr. Shipley over at the Pioneer Press, with the scrapped quotes from an article for the paper.

But check out Milbury’s take. Asked if Gaborik is one of the best players in the NHL, he said, "No, he’s not one of best, and he won’t be until he does it in the playoffs and starts showing some durability.

"The guy has the potential to be a premium player, but it seems to me there’s a little to much me-first in his game. For me, that includes the timing of trying to come back; it’s a little too late. It seems awfully convenient that he would come back with 10-12 games left, that he returns just as he achieves free agent status. I have nothing to go by on this, but it looks suspicious to me."

"They haven’t made a run in a few years, and the team certainly hasn’t been able to ride (Gaborik’s) shoulders to an impressive playoff run. He’s got great talent and great skills, but he’s proven he’s somewhat fragile, and he hasn’t proven his character. In other words, good luck getting that 10-year deal."

Those were Shipley quoting Milbury. Here is one direct from Shipley:

Because of the injuries, and his weak playoff performances the past two years, Gaborik is still selling potential, and potential doesn’t demand the premium he appears to be looking for.

I am almost certain that if you go back and reread every article on Gaborik, there is a definite split between people who think he is one of the best in the game, and those of us who believe he has the potential to be one of the best, but has never proven himself to be durable enough or strong enough as a person for a team to count on him.

He has missed way too many games due to injury to be considered one of the best. He has never been a leader, and has performed at best adequate in one playoff series, while being present but unimpressive for the rest.

Neide posted a reminder to Wild fans that tonight may well be Gaborik's last home game in a Wild sweater. While I can appreciate the guy's talent, and have said so multiple times, I cannot forgive the piss poor attitude, and the putting of team second to himself. I cannot forgive the quotes made early in the season, and I cannot forgive him and his agent making no attempt, none, to rebuild his reputation with the fans.

It is clear that this team is not the same without him, and for that I am truly sorry to Wild fans everywhere. To pin all of the team's hopes, and those of the fans, on such a useless savior is truly disappointing.

It has been clear for a long time that he has no desire to play here, despite the half-hearted, cliche "I love playing in front of these fans," canned answer that every player gives in every interview.

My opinion of Gaborik changed very quickly to the negative. I used to be a big backer of the guy. However, when a guy misses games every season of his career, has only one side of an obvious two sided groin issue corrected in the offseason, and then misses the entire year, only to come back for his money making campaign... Nah, I'll pass.

I for one cannot wait for him to be gone. As unpopular as that opinion may be with Wild fans, I really have no respect left for the guy. I hope some idiot GM throws him a $9 million a year deal good for twelve years. I also hope that team is in the Northwest divison so that when he rides the IR all year, they can visit our building multiple times a year so I can laugh in their faces.

It's good to know some of the so called "experts" see it the way I do too.