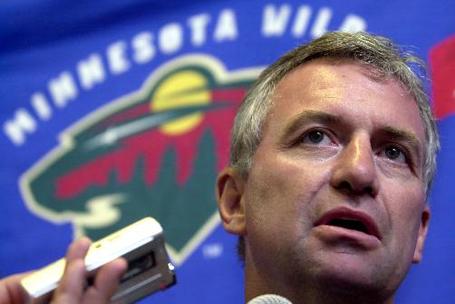 We’ve been ripping Doug Risebrough all season in the Wild blogosphere. The guy drives me nuts, yet the "support the team at all costs, they brought hockey back" minions are the types who allow the team to mire in the "we’re just happy to put forth effort and compete" mentality.

Until people stop renewing season tickets and they lose their sellout streak, I don’t see any future in sight.

Then you add the fact that they fall back on they injury cop-out, even though St. Louis, Vancouver and Philadelphia all had more man games missed due to injury and made the playoffs, and he gets to drive the franchise further into the ground.

Doug Risebrough, Tom Lynn and Chris Snow need to go in order for the Wild to step forward.

Let's take a quick look at the two lost drafts:

These are the guys who have had a major impact who were taken after Pouliot:

These are the guys who have had a major impact who were taken after Thelen:

Now you have to wonder what the hell the scouting department and the front office were thinking. With them it’s miss after miss after miss, then they give ridiculous contracts to guys like Bouchard, Johnsson and Zidlicky. These moves hamstrung Lemaire and made it difficult to get the counter-attacking style to succeed.

The scary thing is that I only posted draft miscues, that's not even taking into consideration the fact that he lets players walk away (Dominic Moore, Pavol Demitra, Brian Rolston) and other GMs take those players and then trade them for high draft choices (Brian Burke moved Dominic Moore for a second round pick). Or he throws in a player to obtain a guy (Patrick O'Sullivan and a pick for Pavol Demitra) then lets the guy he acquired walk to a divisional rival and the team with the traded prospect trades him to another team and gets players and picks in return (O'Sullivan went to Edmonton by way of Carolina and the Oilers gave up Erik Cole and a second rounder to get him!)

The point is that too few people really look at the problems with the team, they simply blame the players or the coach and the system. Well, the system works if you have the right players, and the front office here isn’t capable (or willing) to get the right players.

This is a key draft for the Risebrough and the future of the Wild. With the #12 pick, they have the opportunity to get a guy who can make an impact within the next two years, or potentially package that pick along with a Zidlicky or Johnsson or Harding and move up or get a player who is ready to go now. The question remains, what is the identity of the team? Are they ready to compete next season, or do we play for the future? More importantly, do we trust the braintrust at the Xcel Energy Center to make the right decision?