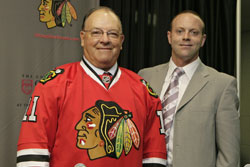 Bowman works closely with General Manager Dale Tallon, attending to the day-to-day administration of the Blackhawks' hockey operations department. His primary responsibilities include all CBA-related matters such as contract negotiations, free agency, salary arbitration, player movement and player assignment. Bowman tracks the progress of the Blackhawks prospects by working closely with the staff of the Blackhawks’ minor league affiliate in Rockford. He also assists with player evaluation, prospect development and professional and amateur scouting.

Perfect, it's a guy who has experience in scouting, negotiations, prospect development and handles the day to day operations of the hottest, youngest team in the NHL.

Umm, I fail to see the problem here. He has the pedigree, has the success in drafting, signing and developing young talent.

Let's look at players drafted, signed and developed since he has been in that role.

That is a huge amount of talent drafted, developed and put into the team since the 2002 entry draft. If the Wild could mimic themselves after any franchise in the NHL right now, the Blackhawks are that model, but we may have to hit rock bottom to get there.