According to numerous sources, the Minnesota Wild have made their selection and owner Craig Leipold will make the announcement of the new General Manager Friday, May 22, at 4:00 pm CDT.

Most people believe it comes down to Chuck Fletcher, David McNab and *puke* Pierre McGuire.

I'm still holding out hope for Fletcher, and Eklund says:

Guess that means we're looking at: 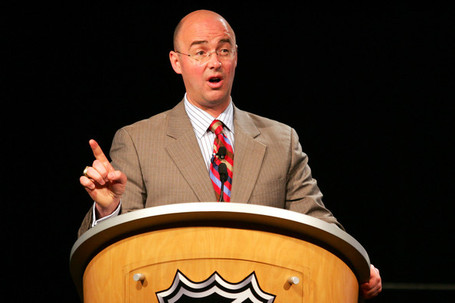 It's now confirmed from Russo:

According to NHL sources, the Star Tribune has learned that the Wild has agreed to terms with Pittsburgh Penguins assistant General Manager Chuck Fletcher to replace Doug Risebrough, who was fired April 16.

An announcement is expected Friday.

Fletcher could not be reached for comment and the Wild would not confirm.

Fletcher, 41, the son of longtime NHL exec Cliff Fletcher, has been around the sport since he was a child. He's got 16 years of experience with Florida, Anaheim and Pittsburgh, and he's only 41, working alongside some of the NHL's most respected executives -- Bill Torrey, Bobby Clarke, Bryan Murray, Brian Burke and now Ray Shero.

He's a rarity because he negotiates contracts, like the $58 million Pavel Bure deal in Florida, and helps scout and draft players. It's a team effort, obviously, but some of the best include Ed Jovanovski, Rob Niedermayer, Rhett Warrener, Kristian Huselius, Ryan Getzlaf, Corey Perry, Joffrey Lupul and Bobby Ryan.