View From The Links

Share All sharing options for: View From The Links

I know it's been a while since I've visited here, and while I have been busy patting myself on the back for assisting everyone here in yelling loud enough to get Doug Risebrough fired, it's only fair that I start sniffing around a bit to see who can step in and help right the ship.

Of course, neide has been on the mark here with his potential GM profiles taking the time out to look at things logically and address how their résumés match up with what the Wild should be looking for.

The same can't be said of other folks in hockey media who are looking to hook their compatriots up with new jobs. 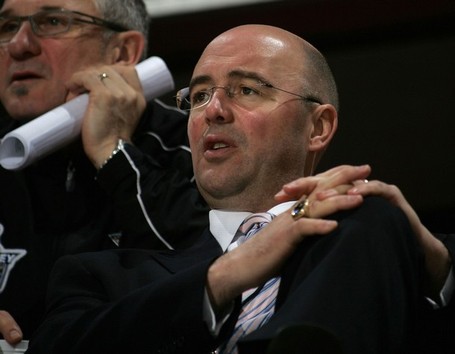 I know that there's generally a Toronto slant on some news and, let's face it, when you've been as unsuccessful as the Maple Leafs have been over the last few years sometimes you just want to spread the misery around a bit.

After the jump, we'll take a look at the array of washed-up executive stars who are being mentioned to spread their special brand of Toronto misery around to Minnesota.

Damien Cox from the Toronto Star writes a delightful piece about how TSN and NBCs Pierre McGuire will be interviewing with Wild owner Craig Leipold and from there he throws around a few names, lay it on me Damien:

Cox proceeds to talk about why McGuire makes a great candidate for the Wild but makes sure to toe the line between full approval and potential disaster saying that going from TV to the front office is sometimes difficult:

Davidson, meanwhile, is a strong example of an accomplished broadcaster moving effectively into a NHL front office job. Dale Tallon, GM of the Chicago Blackhawks, is another.

Melrose, on the other hand, was a complete disaster as a head coach, and one can only imagine he would have been even worse as a GM. Cherry, meanwhile, was never again involved in the NHL after leaving Colorado 29 years ago, but his brief attempts to run and coach the Mississauga major junior franchise ended in near ruin.

So talking the game doesn't necessarily translate into a winner.

Cox seems to forget that Melrose was a coach before he was on TV (remember Damien, the Kings beat the Leafs on the way to the Finals in 1993) and was the victim of some brutal front office mismanagement in Tampa Bay from "eccentric" ownership.

Is Pierre McGuire a real candidate here though?  I know his name has been bandied about for the opening in Colorado as well, but I can't help but feel that these are just courtesy interviews, a warm up act if you will.

The thing about McGuire though, and the connection that Cox should've been making to Melrose instead of pussy-footing around it, is that McGuire has been out of hockey management since the early-to-mid 90s, the same amount of time Melrose was away from it before becoming the instant fall guy in Tampa Bay.

I know Pierre is a passionate guy about hockey and Lord knows he makes his feelings known about Canadian juniors players well known, but does that passion translate into office smarts and good decisions?  It's tough to gauge that from my lofty armchair but I'm going to go out on a limb and say that it doesn't.

After all, if hanging around the bench and locker rooms was a pre-requisite for becoming a general manager, why not hire the equipment manager to be his assistant?  Come on, he's been there a while and knows the game too!

As for the other guys on Cox's hit list, well, one out of four is OK, right?

Chuck Fletcher has been discussed here already by neide so I won't get into anything further about him.  I think he's a guy that passes the sniff test simply because he's not named Doug Risebrough, but by that logic, we're all qualified for the position.

Neil Sheehy is an interesting name.  By the way, who is Neil Sheehy?

Neil Sheehy is an agent and he's got a website.  His most well-known client?

Nevermind the immense conflicts of interest that would come up with having a general manager coming from the agents office (and Cox rightly pointed out a couple of situations where this has played out with Brian Lawton in Tampa and Mike Gillis in Vancouver) but something about this stinks to high heaven bringing in the guy responsible for getting Jeff Finger a ridiculous contract in the NHL based around little NHL experience.

The mind boggles over this.  I don't care how many legends of hockey say nice things about Neil Sheehy, the fact that this is the first time I've heard about him getting mentioned as a  GM candidate makes me wary, even moreso given Sheehy's connection with the Toronto media via Jeff Finger.

The suggestion of Pat Quinn makes me insane because as a general manager, Quinn hasn't been employed by an NHL team since before the game-altering lockout (Quinn was the Maple Leafs GM from 1999-2003) and knowing the brand of hockey Quinn wants to recruit for... That would leave me wondering why Jacques Lemaire would bolted town in the first place.

Then again, Quinn would end up coaching the team too so it's probably a moot point anyhow.  Quinn has been engrossed in Canadian junior hockey since September and coached that squad to a gold medal in Ottawa this year, further cementing Quinn's legacy as a Canadian coaching hero.

Does he get credit for bringing the Maple Leafs out of obscurity in the late 90s in the spend-crazy NHL era?  I guess, although judging him by the rosters he assembled while GM of the Maple Leafs from 1999-2003 I'd say he was better at overpaying for subpar or washed up talent.

Having Mats Sundin and the Grind Squad carry you doesn't really show much of a track record when we're looking for something comparable to today's NHL. Then again, the Wild are a team that's been Marian Gaborik and the Grind Squad, so perhaps the suggestion of Quinn is meant to say that Craig Leipold wants to stay the course.

God help us all.

As for John Ferguson...  Well, have a look at what the guys at Pension Plan Puppets had to say about him and see if that sounds like anyone we know here:

Now, I don't want to say that sounds like Doug Risebrough - but if someone gave me a nameless description of a general manager that read like that, you can bet your ass the first name I'd think of was "Doug Risebrough."

Why even mention someone like John Ferguson, Jr. for this position?  I'd like to think that Craig Leipold would be smarter than that to even talk to a guy like that but perhaps the pool of qualified candidates is smaller than we think.

If that is the case, a new face isn't going to be helping a whole lot.

Then again, maybe Craig Leipold could just read this website and get some better ideas on where to snoop around for a qualified and hopeful person to become the next GM of the Wild.  If Leipold has his ear to the ground and keeps hearing the names of Maple Leafs ghosts of the recent past, this team's immediate future is doomed.  McGuire isn't the answer, Quinn isn't the answer, John Ferguson Jr. is a joke.

Keep looking Craig, the answer is out there - you just won't find it in a column by a "respected" journalist.