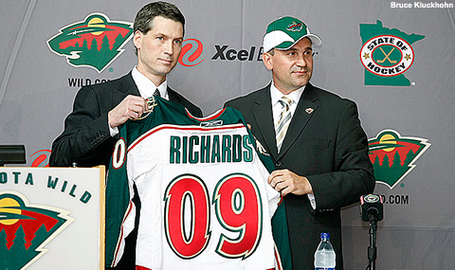 As speculated upon months ago, Todd Richards has been named the new head coach of the Minnesota Wild. The Richards speculation was first posted online by Fiona Quick in her Quick Facts column over at Minnesota Hockey Journal. Major Kudos to Quick, as she absolutely nailed this one.

Chuck Fletcher will make a hire of someone with whom he is comfortable (they worked together with the Wilkes-Barre/Scranton Penguins), someone with whom the community should be comfortable (he's one of us, born in Crystal, played high school hockey at Armstrong, then played for Doug Woog at the U of M from 1985-1989, amassing 158 points in 167 games from he blue line and coming a goalpost away from being an NCAA champion *sigh*).

Richards is a guy who promotes an up-tempo offense, solid back-checking and knows the "new" NHL. This is an outstanding choice by Fletcher and a great way to reboot the franchise. I look forward to seeing what Richards can get out of this team and can't wait to find out what he and Chuck Fletcher have in store for the personnel.

Take a look after the jump at an excerpt from Fiona Quick's interview with Todd Richards in December.

The Wild will be streaming the video of the Richards press conference at 11:45 over at wild.com. Feel free to post comments here!

You took this job in order to gain experience in the NHL to hopefully get a head coaching job in the NHL.  Have you thought about the possibility that maybe that job could mean coming home and taking over behind the bench with the Wild and the extra pressures that would bring?

Especially being a first year head coach, number one the expectations in the state of Minnesota, it's at the U, its at the high school programs, even the youth programs, there is always this expectation of winning.  And when you get up to the NHL level, every NHL team expects to win, but to be in a state that expects you to win that's added pressure, its like being in Montreal or Toronto or all the Canadian teams but those two teams have great tradition, it would be tremendous pressure.  But as a coach, I felt every year whether as a head coach or assistant coach I've grown and I've developed and its no different this year.  I'm learning a lot, its been a great adjustment, going from the American League to the NHL just in the lifestyle when you're on the road how teams function on the road, and how you deal with star athletes and managing them and you're playing every other day, whereas in the American League you have a lot more down time you have a lot more practices.  Where here its literally getting ready for games, getting your team ready for games and getting your players ready for games.  So there is a big difference.  Hopefully whenever the time arises, I continue to develop.  And if the situation were to ever occur I would hope I would be ready for the opportunity.