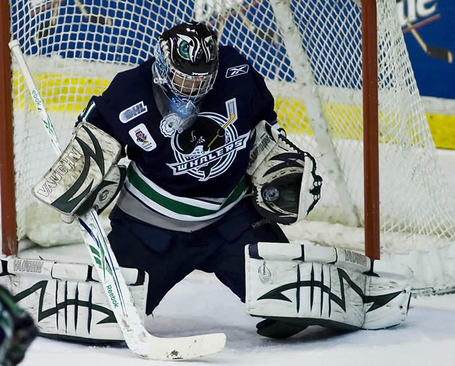 I actually love the idea of Matt Hackett, as the #1 ranked goaltender, but again, this team needs forwards and offense more than anything. I don't quite understand this, unless they have no confidence in Khudobin, Brust or Schaefer in the future.

• Named as the Plymouth Whalers Most Valuable Player for the 2009 playoffs, Hackett went 6-5-0 with a 3.01 goals-against average and a .930 save percentage, facing more than 40 shots in five of the 11 games. He helped lead the team over the Sarnia Sting in the first round, before losing to the number one ranked Windsor Spitfires in the conference semi-final.

• After starting the 2008-09 season as the back-up goaltender for the Whalers, he worked his way to the number one spot by November and led Plymouth to a fourth place finish in the Western Conference with a 34-15-3-0 record in 55 games. His .913 save-percentage ranked eighth in the Ontario Hockey League.

Plymouth Whalers’ goaltending coach Stan Matwijiw
"You look at Matt, and he’s a pure goaltender. He’s the type of goaltender that NHL teams are looking for. He’s big in stature and takes up a lot of net. He’s very fundamentally sound. The work that I’ve done with him is tweaking a thing here and there. He’s already had good instruction, with his uncle (former NHL goaltender Jeff Hackett) already a goaltending coach in the NHL (for Colorado)."