Puck Daddy has a very good piece up about the two major disciplinary actions (or non-actions) from the past couple of days. Please, go read the post.

The quote of the day for Wild fans, and a quote that proves that the NHL doesn't care if someone tries to kill someone, just so they haven't done it before:

"Every 5-minute major is not a suspension or a fine. There's gotta be a little bit of passion in the game.

"Cal Clutterbuck leads the League, or is close to leading the League, in hits. He hit Gonchar very hard into the boards prior to that -- real hard. That could have been boarding. Could have been charging. It wasn't. So Gonchar, who's been hurt before and knocked out before and suffered a concussion; he's on the receiving end more than he's on the giving end -- I don't think he's ever been on the giving end -- he went in and it was a 5-minute interference penalty and he hit him with his shoulder.

"We felt the penalty was the penalty. We don't feel [based on] past history that Gonchar deserved to be suspended. Clutterbuck came out and I thought his statement was ridiculous, that somebody's going to ‘get this guy'. Last time I looked, Sergei Gonchar wasn't on too many guys hit lists."

That is from Colin Campbell himself, via EJ HRadek, and I have a follow-up question: "Mr. Campbell, are you drunk at this very moment?"

Let me give you all a moment to absorb that. "We don't feel IN PAST HISTORY that Gonchar deserved to be suspended." So it has absolutely nothing to do with the current action on the ice. Got it.

So let me ask this question: If Chris Simon had absolutely no history of having done anything wrong before he tomahawked Ryan Hollweg, would he have been suspended? How many dirty hits does it take before someone is considered a suspendable person? Can we get it spelled out in a rule please?

Is there any way, any way at all that the RULE BOOK could explain this to us? Or is it normal for a major professional sports league to allow one man to make discipline decisions that make as much sense as my 18 month old daughter asking for the nuclear launch codes.

Let's break it down, shall we. For in it's glory, this may be the dumbest string of words that any one man has ever put into the public sphere.

Every 5-minute major is not a suspension or a fine. There's gotta be a little bit of passion in the game.

Agreed. Not every five minute penalty deserves a suspension or fine. That much is obvious. However, when a player admits fully that he hit someone high, with intent for pay back, that leads logically to intent to injure. Intent to injure automatically should equal a suspension. Nice argument, though, Mr. Campbell. Passion in the game, yes. Smashing people across the face with your elbow? Not so much. That's called inability to control your emotions, not passion.

Cal Clutterbuck leads the League, or is close to leading the League, in hits. He hit Gonchar very hard into the boards prior to that -- real hard.

And? So what? How many questions can you come up with that all mean the same thing? What's your point?

Clutterbuck hits people. He checks them. Sometimes hard. Unless we have moved into high school girls hockey, or perhaps to under 13 year old hockey, checking is legal, and there are no rules as to how hard you can hit them.

So it could have been, but it wasn't. So either you really don't think it was, or you are admitting that your referees blew a call they should have made. Which is it?

Mr. Campbell, are you saying that any player who has been injured in the past now has free reign to lay illegal hits on players? Because that is certainly what it sounds like. He has had a concussion, so, what the hell, let him hand out concussion inducing hits. Sounds fair. He's had one before, so what the hell, right?

Does he also get to stick his leg out and go knee-on-knee with anyone he wants? Since Ovechkin did it to him, Gonchar must be permitted to do that too. Any other injuries Gonchar has permission to inflict?

As for him hitting Clutterbuck with his shoulder. Not so much, Mr. Campbell. Do you not have access to Youtube? Perhaps someone could teach you how to do a screen capture, because this moment, right here, is in internet speak, where you get "pwned." 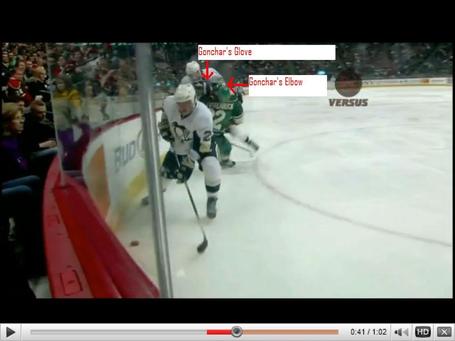 Unless Gonchar's shoulder is three feet long, his shoulder is not what is in Clutterbuck's forehead in this picture. Nice try.

We don't feel [based on] past history that Gonchar deserved to be suspended.

Ugh. My argument against this is above, but let me just say this. Until Colin Campbell is in the unemployment line, I would not want to be in the NHL anymore. This is one of the most dangerous admissions I have ever read. Go ahead Mikko, chop someone across the shin, buddy. You are a stand up player, and have no past history, plus you had someone do it to you, so go right ahead.

Clutterbuck came out and I thought his statement was ridiculous, that somebody's going to ‘get this guy'. Last time I looked, Sergei Gonchar wasn't on too many guys hit lists.

Nice. Criticize Clutterbuck. That's professional. Never mind that the super star just broke so many rules in one play that the refs, media, and players don't even know what the penalty was. Never mind that Gonchar tried to break someone's nose, or worse. No big deal. It is way easy to tell a guy like Cal Clutterbuck to shut his yap.

Why would someone not be out to get Gonchar the next time around? Explain that to me. Oh wait, that's right, because of your stupid instigator rule. No need to let the players police themselves when we have such a crack staff of disciplinarians on the job at NHL headquarters.

Huh, that's strange: Last time we looked Sergei Gonchar was blindsiding an opponent with a hit to the head that's an obvious intent to injure, something that's clearly validated by Campbell's admission that Gonchar had been hit earlier in the sequence.

Exactly. But that would be using logic, Wysh, and that just would not be right.

It's actually stunning how Down Goes Brown perfectly captured the thinking here iin the now-legendary Suspension Flow Chart, though we suppose an argument could be made that Clutterbuck's non-penalized hit instigated Gonchar's hit to the head.

But that argument is secondary to the "Gonch is a good egg" thesis that was clearly at the core of Campbell's thought process here. Which is a joke, considering Gonchar's actions.

Someday, I am going to be somewhere with the guys at DGB, and I am buying drinks the entire night. What ever they want, and in as high of volume as they wanted. It's almost like Campbell himself designed the flowchart.

Alright. I am going to sign off now. Why? Because, it is safer that way. I am about to start typing highly unprofessional things, and I just really don't want to do that.

Let him have it Wilderness readers. He deserves it.