The Minnesota Wild simply ran into a better team tonight. The Chicago Blackhawks are better offensively, defensively and on special teams.

The Wild only had 20 shots on goal but gave up 33, Greg Zanon, Marek Zidlicky and Petr Sykora were all a -2, only Martin Havlat and Clayton Stoner were a +1 tonight, Josh Harding's GAA increased to 3.47.

Tonight just didn't go the Wild's way. Last game against the Blackhawks was a closer affair, but that was when Chicago was without Olympians Jonathan Toews, Brent Seabrook and Marian Hossa. Tonight we saw what happens against a full operational battle-station. The Wild got the first goal from Guillaume Latendresse with assists to Kyle Brodziak and Martin Havlat (can I say again how much I love the Lats-Marty pairing?), but after that, they quickly resembled the planet of Alderaan against the Death Star. John Madden opened scoring for the home team 2:30 later, and the Hawks never looked back. Marian Hossa led the way for the Blackhawks with two goals.

Shots in the first period were 11-5 in favor of the Chicago, then 10-7 in the second and 12-8 in the third. In a sport where the number of shots don't always tell the story, this time they did. The Wild had decent scoring chances in the first period, but too many shots were blocked or missed the target entirely. That problem seems to be one that has plagued the Wild since the inception of the franchise. I'd love to see numbers on shots the Wild have had blocked versus shots that they have blocked.

The Wild have now lost four games in a row, and with Calgary, Chicago, Pittsburgh and Vancouver coming up on this homestand, it could very easily stretch to seven or eight. If that's the case, look for the team to fall periously close to being out of the race and to start shopping guys like Brunette, Sykora and Nolan.

But frankly, tonight's loss to Chicago doesn't matter because: 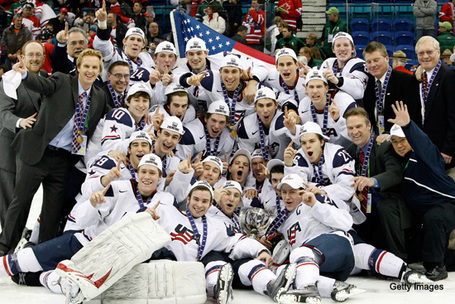 It's been five years, and both games against Team Canada were nail-biters, losing in the opening round on New Year's Eve in the shootout and tonight in overtime both after giving up a 2-goal lead late, but the boys from the Red, White and Blue did American hockey fans proud tonight, hanging on and winning the gold medal in overtime on the bitterly cold, windswept prairie of Saskatoon. Now, let's hope the American Olympians can repeat the performance in Vancouver. Read the story on the winning performance over at TSN.

3. Brian Campbell (2 A)
Questions to Answer