Share All sharing options for: Missed Opportunities: Wisniewski and Hjalmarsson

A fair warning... some language in this post may not be suitable for some readers. Not that anyone who can read this doesn't already know those words, and use them regularly, but hey... maybe someone doesn't. I apologize to those people in advance.

We were once again treated to the wonderful and "consistent" job of Colin Campbell on Tuesday, this time for two infractions that could not be more different. One involved a stretcher, and the other involved... well... explination to children, I guess. The controversy this time comes not from players being suspended, or from the length of those suspensions, but from the similarity of the suspensions despite the completely different circumstances.

Make the jump, and let's work together to figure this one out.

Here is the hit from Hjalmarsson on Jason Pominville:

To be fair, this is the Buffalo feed, so try to ignore the reaction from the announcers.

And here is the gesture from James Wisniewski:

In one, a player is hit from behind, in anticipation of the puck arriving. Note that the puck was not there. It was almost there, but it was not there. The hit landed shoulder to shoulder, but it was the front of Hammer's shoulder, and the back of Pominville's. Checking from behind is a penalty in every league on the planet, including the NHL. The NHL calls it boarding, but it remains the same infraction.

I have seen, and read, the defenses of the hit. From Chicago fans, from neutral parties, and from former players. I understand the need for the NHL to not devolve into figure skating. However, I disagree with the defenders. If this hit had come from the front, or even the side, I would be on your side. However, it came from behind, and it deserved to be suspended. Hammer is a great young player, and he made a mistake. He needed to be taught a lesson, and hopefully he learns it. A play on the puck in this situation would have been just as effective as a hit.

I won't harp too much on this. It was a bad hit by a good player, and the league punished it. I would be standing and applauding if Campbell had ended his day there. He didn't.

Now... onto the second video. In case there are those of you out there that do not understand, Wisniewski was telling Avery to go suck a dick, or something along that line. It was a crude, distasteful gesture that, as many have pointed out, would not be tolerated in any workplace in North America. Except the Oval Office.

To those that use this as justification for Wisniewski's suspension, I ask you this: How many jobs have you had where beating the crap out of someone was acceptable? If you don't like the way the guy in the accounting department wrote your budget, can you march down stairs, drop your ties and start swinging? No. You can't. It's not allowed in any workplace in North America... except the NHL. 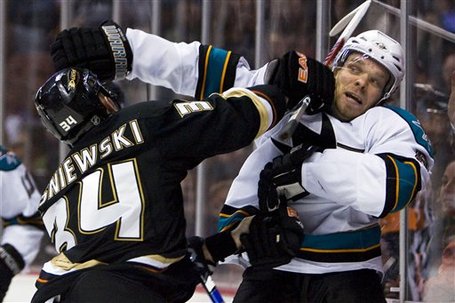 Would this be accepted in your workplace?

What's the point? That's the point. The NHL is not an office, isn't a factory, and isn't a retail sales floor. The NHL is, by definition, a hostile work environment. If this was Bill Daly making this motion to Colin Campbell, while extremely funny, it would be unacceptable. On the ice, in the heat of battle, between two men paid to hate each other... I call it par for the course. Basically, Wisniewski is being punished because he made a gesture rather than just saying, "You suck dick, Avery."

And that is patently absurd.

Every game, multiple times, these players talk trash. You think it is all "I'm going to out skate you to that puck, good sir" or "I'm going to shoot this puck so hard that you will have no chance to stop it, my friend?" I'm guessing not. Grown men, using adult language, being paid to hate each other.

As Hockey Joe points out, this was purely a PR move. If the camera doesn't catch the gesture, and there is only written reports of it, nothing happens. If Wisniewski punches Avery in the face, it goes in the box score and no one thinks twice about it. If Wiz simply expresses his thoughts through words rather than sign language, nothing happens.

Nothing. Which is exactly what should have happened here. At very most a good stiff fine, contributing to the charity of choice would have been just as effective.

Wheel of Justice, turn, turn, turn... teach us the lesson we should learn.

The lesson to NHL players in this situation is clear. If you are pissed off at someone on the ice, and want to take out your aggressions, rather than make a gesture, crush them into the boards from behind. I mean, if you hurt the guy, it certainly sends a more intimidating message, is just as disrespectful, and carries the same penalty. If you're going to go, you may as well go all out, right?

Now... as a parent, I ask the NHL a question. Which lesson do you think is more difficult to teach to my kid? What the gesture that James Wisnewski made means, or why the guy is laying on the ice and being taken off on a stretcher? Neither are easy, and both start in similar ways:

"Well, kiddo, you see, when two people really hate each other..."

"Well, kiddo, you see, when two people really love each other..."

If you or your kids are offended by something like this, I recommend watching shuffleboard or, perhaps, a nice round of golf. I would stay away from tennis. Those people get pretty mad.

And that is your lesson of the day.