We here at Hockey Wilderness have decided to undertake a seemingly unusual project. We will be reaching out to the "main stream" media members here in Minnesota, and perhaps around the NHL. We will cover a broad range of topics, and will try to tie back into the Wild in some way. We hope you enjoy the series as much as we enjoy bringing them to you. 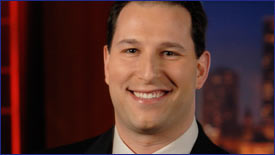 Hockey Wilderness: Give us a brief history. Where did you grow up? Your favorite teams?
Dave Schwartz:  I grew up in Selkirk, NY a small town outside of Albany, NY. I was a Mets, Jets and a Syracuse fan and a diehard Ranger fan (1994 was the best year of my childhood).

HW: Favorite sport? College degrees, etc?
DS: Hockey, hands down. I have a Bachelor's Degree in economics from Hobart and Williams Smith Colleges in Geneva, NY and a Master's Degree in Broadcast Journalism from Syracuse University.

Editor's note: We'll do our best to still respect Dave after finding out he is an Orangeman AND a Rags fan.

HW: What led you to sports reporting?
DS: A chance meeting with the General Manager of college radio station. I met him at orientation and went to an informational meeting the next day. That weekend I was doing color commentary for the college football team and the rest is history.

HW: How many jobs did you apply for before you landed with KARE11?
DS: Between two other jobs in Bemidji, MN and Shreveport, LA, I sent out a lot of tapes...a LOT of tapes.

HW: What's it like to work with Eric Perkins?
DS: It's like having one of those really weird, strange, dreams that you still think is real after you wake up. Just kidding, Perk is an odd dude. But he is a great co-worker and a dedicated father and husband.

HW: How about Randy "The Icon" Shaver?
DS: It's like learning hockey from Wayne Gretzky. Randy is one of the best in the country at what we do and I am thrilled to get to learn from him every day.

HW: What is the best part of your job?
DS: Telling stories. I love to tell stories whether they are about an 8-year-old chess player, or a Vikings game. I become the front line and first stop for information about an event and my account of that will help people shape an opinion about what occurred.

HW: Greatest story you ever got to cover? Worst?
DS: Best: Former Gustavus Adolphus College Tennis coach Steve Wilkinson's retirement. After his kidney cancer went into remission it came back last year forcing him to retire. It was a story about his indomitable spirit and the success he's had mentoring players both on and off of the court.

Worst: In Shreveport I had to report on a college basketball player who had died of heart failure in his dorm room. We had to interview coaches and his parents. It was a very sad day.

HW: How about the story you have always wanted to do, but haven't had the chance?
DS: A sit-down interview with Wayne Gretzky. I have interviewed him once when he was the Head Coach in Phoenix. But I'd really like to pick his brain about what it was like to be such a pioneer for the game.

HW: Being a "big shot" sports reporter, interviewing sports celebrities becomes second nature. Still, there has to be that one person that you think to yourself "Man, I get to go interview ______ today." Who is that? Why?
DS: I have to say the first time I walked into a Brett Favre press conference it was a pretty cool. He had just signed and every national network was at Winter Park. I remember thinking, "Wow, this is one of the best to ever play the quarterback position."

HW: Is there any sports figure that still makes you nervous about interviewing them? (Remember this is going in print.)
DS: I don't interview him anymore, but Bill Parcell's made me a little nervous when he was head coach of the Dallas Cowboys. Bill controlled the press conference and the room. He answered what he deemed to be an acceptable question. If he didn't like it, he'd let you know it.

HW: Outside of the KARE family, who is your favorite sports reporter?
DS: Dan Patrick. I love the way he interviews and gets such great answers from people.

HW: Final question on the personal stuff: Who is your favorite player of all time and why?
DS: Wayne Gretzky. I don't really know why other than the fact that he was so electric with the puck. He also winked at my when I was 11. He was playing for the LA Kings at the time and we were watching them play the Rangers. I was the only one watching the Kings warm up and he smiled and me and winked as he skated by. I always thought that was cool.

HW: Turning to the Wild, in the original email, you mentioned hockey is your passion... what is it about the game that you love so much?
DS: Its speed. The game is so fast and played by guys who are so big. On TV you just don't realize how talented these guys are. ....well that and I love to see a good hockey fight, there is nothing better.

HW: What are your thoughts thus far with the pre-season?
DS:  I hope they get a lot better. I didn't see every game, but what I did see was a team that is making too many mistakes.

HW: What is your prediction for the season? Do they make the playoffs, or are they still outside?

HW: What are your impressions with the new system instilled by Todd Richards?
DS: I like it. It's a good system it just takes the right personnel to make it work. Fast, soft-handed defenseman are hard to find. Chuck Fletcher has done a great job bringing in the players to help, but there was very little left in the system from the previous leadership.

HW: The struggles early on, are they the result of coaching issues, incorrect personnel, or the personnel just not doing their jobs? How would you fix them?
DS: Whether a team wins or loses it's because of everyone. I think it took the team a little while to get used to Todd's system, but they missed the playoffs last year because of that early trouble, not the end of the season - when they played better. I truly believe had they had better results (not necessarily a Stanley Cup) Chuck Fletcher should have been in the running (not winning) G. M. of the year. The guys he brought in last year made a huge difference: Martin Havlat, Kyle Brodziak, Chuck Kobasew (had he stayed healthy) and of course Guillaume Latendresse (whom he practically stole!) all made big impacts on this team. Then, this year he brought in John Madden, Matt Cullen and Eric Nystrom, guys that will be a big part of the team this season.

The only thing this team is missing is a superstar goal scorer (Gaborik, Ovechkin, Crosby) but those guys usually come in drafts and you have to finish pretty bad to get those kind of picks.

So I guess I don't have an answer to how to fix it. I wish I did though.

Hockey Wilderness would like to thank Dave for taking the time to do this interview. We are humbled and honored that he would do so. Thank you also to KARE11 for allowing him to do so. You can watch Dave on KARE11 News broadcasts at 5, 6, and 10PM on channel 11 in the Twin Cities area. You can also find his work at KARE11.com.