It's been a long time since I have had a post holiday hangover (non-alcohol based), but after the awesomeness that was Veteran's Day, today feels a bit raw. In a good way, of course. Thank you to all for the love of our troops and for the love of the interview series. They aren't going away, as I already have two more in the queue for the weekend. If you know someone, or are someone, who wants to participate, shoot me an email.

Today, you get another "hockey" game. This time, the Wild are in South Florida, where Russo got his start. Expect just a bit of chirping about that today, as I'm sure it won't come up. Wait. What? It already did? Oh, well, see then? Good stuff all around.

You'll have JS again tonight on the "beat" so you may want to get your entertainment value this morning. (I kid.) Head over to answer the Facebook Question of the Day, join or donate to the Hockey Wilderness Movember team, and check out the Hockey Wilderness Store, will ya? Good stuff, including a design that was added a couple days ago. You can finally see it... after the jump.

Oh, and don't forget the create-a-caption! 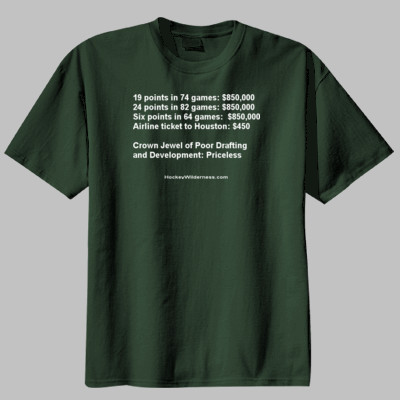 How's that for snarky? It can be yours for just $22.99. They make great Christmas gifts, too.

Coach's worries become all too real | StarTribune.com - Note to Coach Richards: The Hockey gods were displeased. Hold your tongue, sir.

Minnesota Wild's dud angers coach - TwinCities.com - I don't get the feeling from anyone else that Richards was "angry," but OK.

Hitting The Post: Thursday: The good get better, the worst get worse - Goalies. What a fickle group.

Players connect over video game | StarTribune.com - It seems I should be playing more video games. I think I would have to learn how, first.