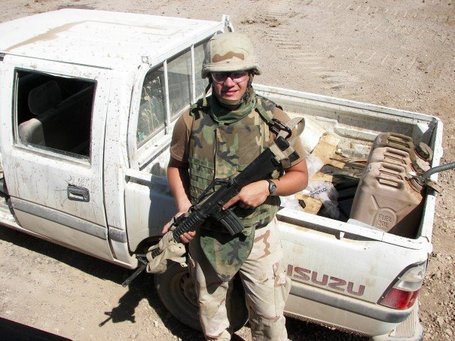 Moving back into our (hopefully) regular Saturday Military Wild Fan interviews. After hearing from Sgt. Hagen on Veteran's Day, I am even more pumped about this series than I was before. Today, we get another cool twist. Hockey Wilderness regular "Jolonco" has offered to help us out.

He has some good stuff, clearly jumping into the spirit of the questions. A great read, so make the jump and learn a little bit about one of your own. Petty Officer Joe Losier.

Hockey Wilderness: How long have you served?
Joe Losier: Still serving, 7 years, 3 months and I'm reenlisting for another 6 this next spring, hoping to go as long as I can.

HW: What do you do in your day to day work for the military?
JL: I work with a United States Navy Construction Battalion (CB or Seabees), based out of Fort McCoy, WI. Our Mission is simple; Provide contigency Construction support to Navy and Joint Force activities worldwide.

We've done humanitarian projects like water wells in Iraq, building schools in Guatemala, putting up tent cities for the displaced in Haiti, and  repairing deployed Sailors' homes right in our own back yard.

My job stateside is that I work in the Supply department at our Headquarters in Fort McCoy, WI, as the Department Leading Petty Officer and oversee the guys that work in our warehouse, central storeroom, central tool room, and automotive repair parts departments.

HW: Have you ever been deployed?
JL: One deployment (so far) to Balad and Baghdad in Iraq in 2006 where I worked for OCF-I.

I missed an opportunity to go to Cuba last fall when I broke my wrist playing in a JMS (Just My Speed) Hockey game at the X. The funny thing about that was I was supposed to leave on Monday, when I broke my wrist on Thursday. As for what's next, the reserve battalions aren't getting the deployments to the "exciting" places in the world as much, our focus is more on the Southern Hemisphere now, which means our next tour will likely be a SOUTHCOM Humanitarian Mission in about 2-3 years.

HW: How did you keep up with Wild news and happening? Were you able to watch or listen to games?
JL: Fortunately, I was able to keep up with the Wild Stateside before setting off for Iraq in March of 06, but I did watch as much Hockey as the Armed Forces Network would broadcast, including a couple of Cup playoff games. The trouble was that working 18 hours a day, sometimes more, wasn't very accomodating to keep up the NHL stuff. But it was a welcome bit of home, especially when I was so far from the X.

HW: What are the five top reasons why you love hockey, and why?

JL: 1. Hockey is a passionate sport. Fans are passionate about watching it, players are passionate about playing it. Hockey is for diehards. Why do you think that almost 18 years after the team left, Minnesota Fans still wear their North Stars jerseys with pride? Really! I mean, what other sport drives 10 year old kids to get up at 0500 on a Saturday morning to go have a bag skate at an outdoor rink when the temperature is hovering around the Absolute Zero mark. (Mine were at Tarnhill Park in Bloomington. Damn! That place was cold!).

2. The Stanley Cup Playoffs. Even when our Minnesota Wild aren't in them, I love the Stanley Cup Playoffs.  In the hockey world, there's only two events that come close to NHL playoff hockey (see #3 and #4). You can sense that the players are really playing for more than just a paycheck, perhaps a bit of honor, almost like they play for immortality. One commercial from last year's finals created the sense of what it must be like:

One of the greatest commercials ever made.

3. Olympic hockey. Not that I was even alive for the 'Miracle on Ice', but I've always had the impression and sense that Olympic hockey was always about more than Nationalism or pride. Often it seems that the ability to take to the ice, play within the bounds of a structured, rule-enforced game, was almost a graceful way to settle international tensions, even if they didn't settle the disputes. Nationalism only adds to it. When you see the guys take center ice after winning a medal, watch them hear their National Anthem played, watch them sing along,  you know that they are proud to have represented their country. There's a lot of honor in that.

4. High School Hockey. There's no single tournament, with the notable exception of the other 2 mentioned above, that outshines the MSHSL Tourney. Every year I'd sit down (often times call in sick to work) and watch from start to finish. I remember a few times as a kid going to bed after the triple overtime games, and despite how tired I was, I still couldn't sleep from the excitement. I can't wait for March to come!

HW: Why are you a Wild fan?
JL: I hate to admit it, but I'm so very much a homer. I used to listen to games when they weren't televised back in 2000. I remember being mad when the games weren't even on the radio.  I'm one of the diehards you love to hate. I'm the guy who insists that the Wild have a chance to make a cup run each and every year, because of the HARD WORK (sorry Tom) they put out.

I think of the comebacks in the 2003 Playoffs. I think of the April 2007 Game 4 in St. Paul Vs Anaheim. I think of great individual efforts, where players carry a team on their backs. Like Wes Walz leading a newly organized team in 2000. Miko Koivu skating past the Vancouver bench and screaming a big "F-ck Yeah" after scoring, Greg Zanon's ability to be a puck magnet and play with a broken foot.

I really love the story lines that this team creates. I love the bring your lunch pail, blue-collar, get-R-done attitude that these guys, the Minnesota Wild, play with. Honestly, what would this franchise be without guys like Darby Hendrickson, Nick Schultz, Andrew Brunette, Jim Dowd, Andrew Brunette, Brian Rolston, John Madden, Owen Nolan, and Miko Koivu?

I love the Xcel Energy Center, sometimes I wonder how we don't sell out every single game, even at the prices that tickets are, just because of the venue we have. You could put two half-blinded rabid squirrels in the arena, and charge $10.00 a seat and it would still be worth going to watch just because of the building and atmosphere.

HW: Who is your favorite Wild player?
JL: Currenty, I've got to give some love to Mikko Koivu, Brent Burns, and of course Cal Clutterbuck. Those guys work so hard. They persevere in ways that make us proud to have them on our team.