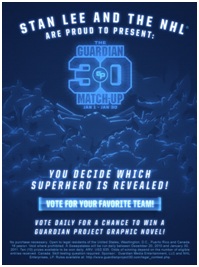 OK, folks... here is the contest I told you about earlier. This one is Twitter based, so if you don't have a Twitter account, now you have an excuse to get one. The poster sounds pretty cool, and they are individually numbered. Could be a cool collectible that none of your friends will have.Regardless of your desire to buy the comic books, or even if you think the idea is a bad one, you can still enter the contest.

If nothing else, you can give it to a kid in the neighborhood. Make the jump for contest details. Keep in mind the rules are written by the PR firm, not by Hockey Wilderness.

Stan Lee and the NHL's new superhero franchise has just launched! Enter The Guardian 30 Match-Up Retweet Giveaway or a chance to win a special Guardian Project Pre-Reveal Poster that is individually numbered by artist Neal Adams!

The Guardian 30 Match-Up is a Facebook application that will enable fans to determine the order in which each team's Guardian will be unveiled. Voting will launch on Monday, Dec. 20 and will continue throughout January, with fans determining which team will win each match-up.  Vote to reveal your team's superhero at the official NHL Facebook channel now!  http://apps.facebook.com/guardian_project

Simply retweet the following message by 12/23 (TWO DAYS!) for a chance to win!  2 winners will be chosen and alerted by @hockeywildernes. Winner selected on 12/24.  Entrants must be 18+ and reside within the US or Canada (excl. Quebec).

Vote now to decide which Superhero is revealed! RT 4 a chance to win a Guardian Project Poster from @hockeywildernes http://on.fb.me/fAD7nT

Info About the Guardian Project

Spawned from the mind of comic book legend Stan Lee, the Guardian Project tells the unique story of a boy who has the ability to transform his imaginary best friends into superheroes.  Mike Mason is the leader of the 30Guardians, the greatest team of superheroes ever assembled (represented by each NHL team).