Wild About Children Event Though the Eyes of a Fan

Share All sharing options for: Wild About Children Event Though the Eyes of a Fan

Go ahead. I dare you to watch the video above and not have an emotional response. If you can, you have a callous over your heart so thick you must be from Vancouver. It took about three seconds for me to translate the entire thing to it being my daughter, and from there, it didn't take long.

Hockey Wilderness usually doesn't do stories on the charitable works of the Wild. Not because we don't want to, but mostly because there isn't much to report. The Wild, like many NHL teams, is made up of amazing men who care deeply for their communities.

However, the stories from the fans involved aren't normally reported. Usually all we get is a press release saying the event is coming up, and another saying it happened. Sometimes, we get a small piece of video, but usually it is nothing more than a blurb. While these works are wonderful and should be even more plentiful (just because they should, OK?), the story is not gripping until there is a fan and a face attached to it.

I nearly jumped out of my chair when Wilderness loyalist shelske told me she knew the family that were the guests of honor at this year's Wild about Children event. I wanted to hear the story of what the even is like from someone who attended it. I wanted to know what happens there, how the players interact, and if the event is worthwhile for the people in attendance.

I was put in contact with Jennifer Anderson, a former teacher of Shelby's, and I asked her to share her family's story. She was kind enough to oblige us, which we are humbled by and grateful for. On this, a day for warm feelings, happiness, and family, we wanted to share her story with you.

I cannot add anything to such a wonderful story, so make the jump, would you?

The following in written by Jennifer Anderson, in her own words, describing the event and the emotions behind it. We hope you enjoy. 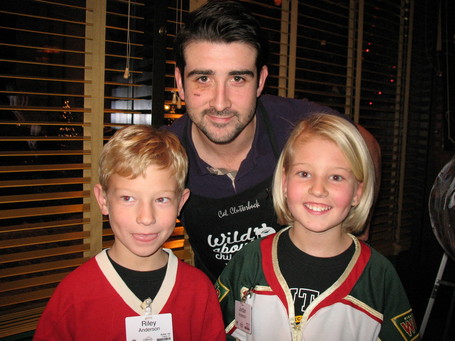 It was truly one of the most memorable nights of our lives.  Jordan was diagnosed with pre-B Acute Lymphocytic Leukemia on September 11, 2008 (7 years old) and completed treatment last month (Nov. 10, 2010) at the age of 10.  She is in remission and, provided her monthly tests come back negative, will be done with chemo.  Each year, the Wild Foundation asks one child to be the guest of honor.  They ask the nurses at Children's for a candidate.  Our nurses chose Jordan because of her love for hockey.  She often had IV chemo/spinal taps and we would then return home (1 1/2-2 hours away in Hutchinson) for practice that night.  She absolutely loves being on the ice and never wanted being sick to stop that.  Prior to the event, we taped a segment at Children's (along with her doctor, nurse, and physical therapist) that was shown at the event.

As for the actual event, it was simply amazing.  About 200 people attend the event.  Some pay for individual spots, for others - a company buys a table.  I was a little worried the players would be dismissive or patronizing, but they were wonderful.  They all had a "job" to do.  Some carry appetizers, some had wine or water glasses.  Others were behind the bar or serving martinis.  They would pause to sign autographs and answer questions, then go back to serving.  They were all very pleasant and looked like they were thoroughly enjoying themselves.  I found it amazing how approachable they were.  We had a personal escort from the Wild Foundation (since Jordan was the guest of honor), but all of the fans were able to meet and have conversations with all of the players.  It didn't seem that one particular player had more people around him than another.  They were all spread out around the restaurant (Pazzaluna's), so it wasn't too crowded.  It was a definite "experience" with the players, not just shuffling from one player to another to get autographs (though you could do that if you wanted to).

What I enjoyed seeing that night was how many people (who paid money to get there) brought their kids.  Many elementary age kids were there and they were all smiles.  Of course, many adults were getting items signed, but you could definitely see the glow on the faces of all the kids there.  The players seemed to enjoy seeing the kids and signing their hats or jerseys, too.  You could bring in your own items, but they also had things you could buy there (shirts, hats, etc.) to have signed with the profits going to the hospital. 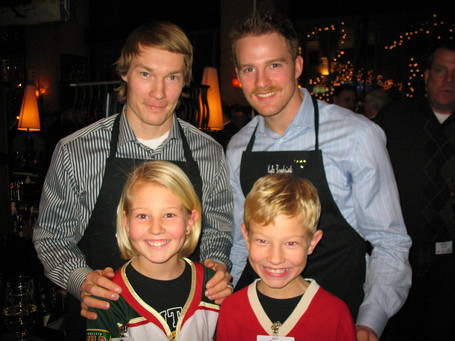 Before the meal is served, that is when the players are around the restaurant.  There is also a silent auction going on and other fundraising activities (that we didn't really participate in, so I can't comment much on that).  Once the meal started, each player was "assigned" a few tables.  Mikko Koivu was our waiter and he was phenomenal!  He was laughing and joking with us and made sure our wine glasses stayed full (as that was his primary job!).  We loved hearing his accent and he also made sure to bring Jordan a signed apron from all of the Wild players at the end of the night.

Of course, the food was amazing.  After the meal, they played the video segment we had taped.  If you are asking for emotions, this is when it gets hard.  It was hard to see yourself and your family being featured at a benefit you have never even heard of before.  Seeing your child's story played for 200 + people is a strange feeling.  Knowing that a professional hockey team is watching is just a surreal experience.  Jordan - she doesn't notice any of it.  She is a very down-to-earth child and takes everything in stride.  For her, it was a fun experience.  For myself and my husband, knowing what a once in a lifetime experience this was is something we will definitely treasure. 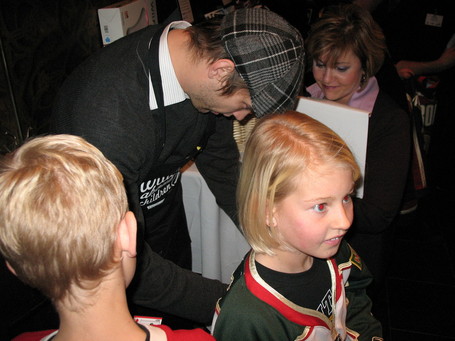 They also had a live auction (a trip for 2 to Los Angeles on the Wild team plane, see a game, etc.) and a personal dinner with the chef from Pazzaluna's.  They also had a raffle for the aprons each player was wearing (embroidered, signed).  All told, they raised about $115,000 for Children's Hospitals.

As for the favorite part of the night...all of it! The kids really enjoyed meeting Cal Clutterbuck.  They wanted him to sign their arms so they could show if off at school the next day.  He added a little heart to Jordan's arm, which she thought was awesome.  Both of our kids have a stronger attachment to the Wild, now.  They can see the players on the TV/news/etc and remember which one it was, what he was wearing or serving.  I cannot think of anything that was negative about the entire night.  We knew it would be great, but it was even better than we imagined.

If you are a true Wild fan, this would be the ulitmate experience.  I am not sure how everyone finds out about this or the cost, but it is typically held the end of November/beginning of December and always at Pazzaluna's.  I can't imagine there is another place to get this much contact with this many players at one time.  It is the only event the Wild expects all players to attend, we were told.  And of course, it is for a great cause. 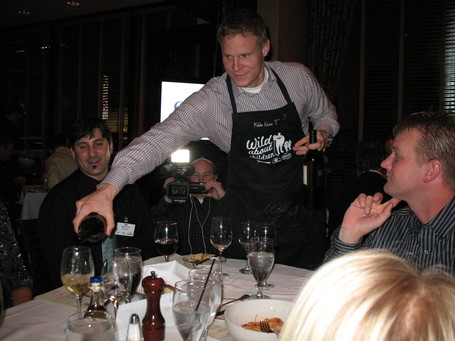 Thank you to Jennifer for sharing this story. It gives this event a reality that is was lacking, at least to me. While we all know these events take place, it feels as though they happen in another time and place. The link to a real person, a real family, that not only was there, but that were the guests of honor truly makes this event real.

To Jordan - we here at Hockey Wilderness wish you continued good health, and we all hope that your love of the game never dies.

Amazing event, amazing story. I am beyond thankful that we were lucky enough to be able to share it with you.