For Detroit perspective, please visit Winging It In Motown

That was ugly. There were two stretches of over 10 minutes without a shot on goal in both the first and second periods. The Wild never mounted any offensive pressure. They were out of sync all night. They took lazy penalties, couldn't clear the zone on the penalty kill, didn't take the zone with speed and were outworked down low in both zones. Just an ugly game all night long. You have to wonder if they had too much egg nog weighing them down.

As Charles Barkley would say, "turrbull"

For more, make the jump.

Niklas Backstrom was fighting the puck, dropping easy saves and being forced to cover regularly. Only Mikko Koivu and Chuck Kobasew weren't either on the ice or in the box for a goal against. Not to mention, in the third period there was a period of sustained pressure of about 3:30, led by those two. Of course, every shot was either deflected or shot into Jimmy Howard's chest, so it didn't really matter.

At least the Wild weren't shutout, though. Brent Burns with a nice garbage goal on the powerplay, with the rebound of Martin Havlat's shot. That goal gives Burns 10 on the season, leading the team. Yeah, a defenseman is leading the team in goals. I'm not a huge fan of that, but it speaks volumes for the lack of offensive production on this team. They are still a team of playmakers and grinders.

In fact, look at the shot chart from tonight. Detroit was able to keep the Wild out, protect Howard and force the issue in the offensive zone. 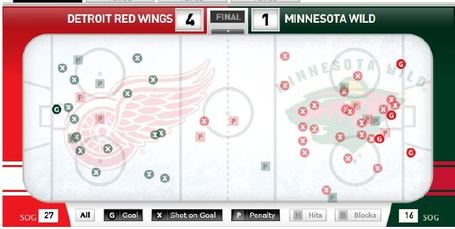 The hardest part of writing a recap after a game like tonight is that they were so outmatched in all aspects of the game, that it's tough to concentrate on "what went wrong", especially coming off of three pretty decent wins, and the best performance of the season in the win over Colorado. I guess, I'll leave it at "they were outworked. All night. All over the ice."

Either way, at least we weren't in New Jersey tonight. They had to watch the lowly Devils, in a snowstorm, with 5,200 in attendance. So there's that.