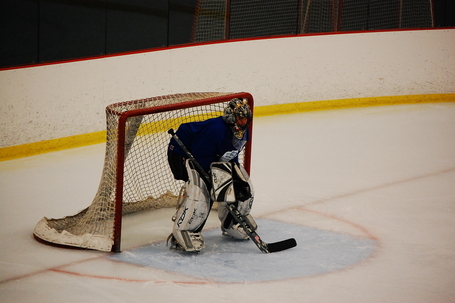 Every now and again in life, you meet someone who adds something you never knew was missing. Master Sergent Shane Hudella is one of those people. In addition to a long and dedicated service to this country, and this state, Shane is also the founder of Defending the Blue Line.

You have read about DTBL here at Hockey Wilderness before, but for those falling behind the curve, DTBL is an organization dedicated to helping the children of service members play hockey. Deployment nor lack of the large amount of funding needed to play hockey will stand in the way of DTBL's mission.

Working with Shane and DTBL, even in a limited role, has been an honor and a privilege. Make the jump and leanr a bit more about a man who has dedicated his life to helping others.

Hockey Wilderness: What do you do in your day to day work for the military?
Shane Hudella: I am a part-time soldier.
(Author's note: Shane just went part-time to run Defending the Blue Line full time. He was heavily involved with the recruiting part of the National Guard here in Minnesota.)

HW: How did you keep up with Wild news and happening? Were you able to watch or listen to games?
SH: Didn't have the Wild yet back then, but I distinctly remember about 8 of us watching the North Stars that year in the Stanley Cup finals against the Penguins on a tiny little 2" travel TV.

HW: What are the five top reasons why you love hockey, and why?
SH: Teamwork, Discipline, Fast-Pace, the athletes are genuine nice guys, great time to share w/family as we all enjoy going to a game.

HW: Why are you a Wild fan?
SH: Grew up in the state of hockey, and the Wild are great community partners, supporting such organizations as Defending The Blue Line

HW: Who is your favorite Wild player?
SH: #32 Niklas Backstrom

It's OK, Shane. I won't tell Burns that he isn't you favorite player.

HW: Who is your favorite NHL player - current or former?
SH: Ronny Hextal, played with attitude and was the first NHL goaltender to record a goal.