A public relations firm representing Cisco's Flip camera recently reached out to us, asking if we would let our readers know about the new NHL-branded Flip cams coming to market today. We said, umm, what can you do for our readers? They said, "How about we give you a free one to give away?" We said "Hells yeah!"

So folks, I can say this, I love my Flip cam. I use it for work all the time, it takes fabulous video, it's easy to use and easy to upload videos. The only downside is audio, but the new one has a port which allows peripherals like a bluetooth wireless microphone. Yeah, that's awesome.

If you have an NHL fan in your life, or if you are an NHL fan and want to get into the YouTubes and such, here's your chance to support the Wild while you use your Flip.

Tell us in comments why you deserve/want the Flip. We will arbitrarily choose our favorite comment and send them a Minnesota Wild-branded Flip camera, courtesy of the folks at Flip and Hockey Wilderness. 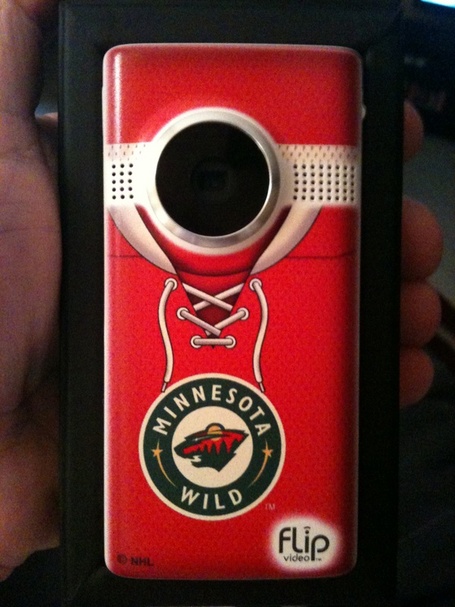 SAN FRANCISCO, Calif. - December 7, 2010 - One of hockey's most iconic phrases - "he shoots, he scores" may soon be replaced by "he shoots, he shares" - as Cisco's Flip VideoTM,  and the National Hockey League® (NHL) team up to offer 30 uniquely designed NHL team Flip video cameras.  In addition, Flip Video will offer Facebook fans a chance to win Flip cameras and a trip to the 2011 NHL All-Star Game presented by Discover. Select NHL.com reporters will also receive NHL-branded Flip video cameras to capture all the hockey action on and off the ice.

Beginning December 7, fans can choose their own official NHL Flip video camera with a custom design from any one of the 30 NHL teams from the U.S. and Canada.  A perfect gift for hockey lovers, the new Flip designs are available through the Flip Video online store: theflip.com/NHL. The NHL-branded Flips will be offered on all of the latest Flip video cameras including the Flip UltraHD, MinoHD and SlideHD*, starting at $149, for anytime shoot and share fun.

Edmonton Oilers right wing Jordan Eberle and Pittsburgh Penguins center Evgeni Malkin are among the many celebrities and sports icons featured in the Flip Video 2010 holiday campaign ‘Do You Flip?'

"Flip is the only video camera on the market that consumers can customize and select from thousands of unique designs. Our ability to offer customization has enabled us to team with the NBA and now the NHL, which was a natural extension for our brand," said Jodi Lipe, director of marketing for Cisco's Consumer Products. "Whether it's at the Stanley Cup Final or an afternoon snowball fight with friends, Flip video cameras are a fun and simple way to capture and share videos with friends and family."

"Hockey fans are in a class of their own when it comes to diehard loyalty," said Dave McCarthy, NHL Vice President Integrated Marketing. "Owning a Flip video camera representing their favorite team is a great way for fans to show support and more importantly have fun sharing their passion with fellow hockey fans and friends around the world."

To help promote the new NHL designs, Flip is hosting a contest called the Flip Video Fan Face-off that will give away one grand prize trip for two to the 2011 NHL All-Star Game in Raleigh, North Carolina, January 30, as well as daily prizes of NHL-custom designed team Flips every day in December.  Hockey fans can face-off for these cool prizes starting on December 9, 2010 at www.facebook.com/flipvideo.

Flip Video is the only video camera line to feature official designs from the NHL and all 30 NHL teams so fans can show their affinity for their favorite NHL team while shooting and sharing  video with others at games, parties or events. Flip video cameras make it easy to share video via email, FacebookTM, YouTubeTM, TwitterTM and even on a TV.

Cisco is also equipping the team of 20 NHL.com reporters with their own NHL logo Flip video camera to use as they travel to NHL games around the U.S. and Canada. With their official NHL Flips, the on-the-scene reporters will be able to greatly enhance their coverage by capturing video footage to post to the NHL.com web site.

All NHL team designs are available at www.theflip.com/NHL starting today at $149.