Are the Wild Ready to "Crash for Couturier?"

Share All sharing options for: Are the Wild Ready to "Crash for Couturier?" 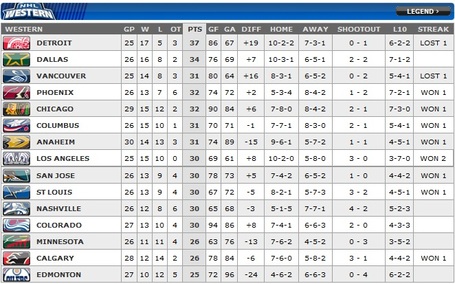 Get this: The Wild are only four points from making the playoffs! All they need is for Los Angeles, San Jose, St. Louis, Nashville, and Colorado to decide they don't really feel like finishing the rest of the season, and the Wild will be all set.

It is often difficult to decide when to be positive, and when to be negative. No one wants to be seen as the guy who thinks the team should plan a parade when there is no hope. At the same time, no one wants to be the guy who writes about the terrible penalty kill when the team is ranked second in the league. It comes down to telling it like it is, and you simply hope you aren't seen as an extremist.

Looking at the standings after last night's action, the Wild are only four points from a playoff spot. That's "the glass is a quarter full" way of looking at it. I would say half full, but who would I be kidding? To the pessimist crowd, they see that the Wild are just one point of out last place in the West.

Where am I? The way I see it, the glass is broken, and the beverage inside has run off of the table onto the floor. Meanwhile the plumbing is leaking, and the only is plumber that is available charges way more than he is worth, but you have to hire him because otherwise your house will flood from the Chinese water torture device currently dripping on your forehead.

If you can link all of that up to actual real world examples, good on ya.

The Pioneer Press had this quote from Matt Cullen today:

"I think we're a team that's right on the edge of being really good, and I think we've shown flashes of that more recently, even though the results haven't borne that out."

Indeed. Maybe the Wild are "right on the edge." However, so are the Oilers. The teams ahead of them in the standings are already "really good." Now, it comes down to being better than teams that have already found their stride. The teams ahead of them are already in the race, and only have to stay there. The Wild have to be better than the "really good" teams.

Also, results are all that matter. Moral victories don't count. Haven't for the past three seasons, anyway.

The truth is, the Wild are in bad shape. They have a handful of positives. Martin Havlat is playing his mind out right now, Brent Burns has returned to his old form, and Pierre-Marc Bouchard is back in the lineup. It is difficult not to get a bit of hope when you remember those three things.

Then you are snapped back to reality. Stupid reality. Mikko Koivu is not himself, Matt Cullen has cooled considerably, and the defensive forwards brought in this season have been offensive, and not in a good way. The short handed goals against have begun to show up again. The team takes full periods off at a time. The goalies are being shelled, and then blamed for losses.

The most telling stat? At this point last year, the Wild were 11-12-3. This year, they are 11-11-4. All of the progress has stopped dead. Last season at this point, the word on the street was one of "They suck, but give it time, this is a new system, new coach, new GM, new teammates." What is the reasoning now? Unless you are in first place, having the same record as last year is not good.

I've been reading posts about the Wild from around the interwebz. There is still a strong sense of "wait and see" from fans and pundits alike. It's only 26 games they say. It's only the second season they say. It's just a slump they say.

No. It's not. The system is in place, the team is in place, and the season is more than 1/4 over. The time for waiting is over, and it is likely too late. Just 26 games? That's 26 games they don't get back, folks. This isn't college, you don't get to re-do your failures to raise your winning percentage. Just a slump? Was last year just a slump? Why is the record more acceptable this year than last?

Plain and simple, the team, as it is constituted, cannot hack it. This is not a team that is suddenly going to rip off 20 straight wins and leap frog five teams and make the playoffs. The time for "what-ifs" has passed. It is time to do the job or pack it up and, as our friends at Pension Plan Puppets said last night, "Crash for Couturier."

I've never been an optimist, nor a pessimist. I have always been a realist. The reality of the situation says that there is little hope. The team needs to stay positive, and I understand that. The fans are going to jump off the nearest cliff if the team loses a game. I understand that, too. The realist that is me says that anything is possible, it just doesn't normally happen.

No one is telling anyone not to cheer for the team, to pull for them to win. On the contrary, this is your team. Full on, vocal support is something every fan should be willing to do until the bitter end. However, savor those victories, because they are not going to be the norm. Maybe that makes the victories they do get more sweet, maybe it makes the bandwagoners jump off. Whatever your perspective, keep an eye on reality, OK?

As for hope for the playoffs, you may want to find a different dream.The Wild have the seventh highest payroll in the league and are currently sitting one point out of last place. If you are still in a "wait and see" mode, promise me you will never go into business.

For those who feel change is not needed, just remember. Nothing changes unless you change something. Enjoy your patience and wait and see attitude. The rest of us will be over here, accepting that this team just isn't very good.