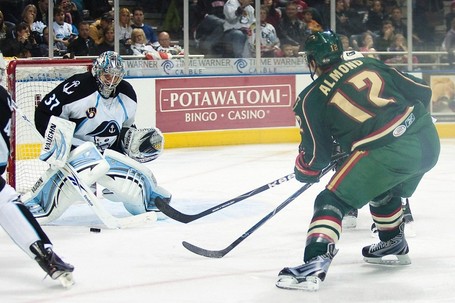 With news out of Wild practice that Robbie Earl has been sent back to Houston, and Cody Almond is being called up for his first NHL stint, it would be time to learn a little about Mr. Almond.

First off, to be clear, Earl has played well with the Wild, but it was time to go back to Houston. Placed on waivers on January 19th, the Wild had 30 days to send him down or he would need to clear waivers again. Since then, he has raised his profile a bit with solid play and some pretty goals. Going into a playoff run, many teams may have had interest. 30 days would have been February 19th, or the middle of the Olympic break, and a roster freeze. This is a move to keep Earl playing during the break and should not be seen as a reflection of his play.

Make the jump and let's discuss the newest center to join the team. Also, don't be surprised if Almond is sent back down before the Olympic break.

First off, the move does not look to be one intended to bolster the offense, instead Almond earns this call up from his solid defensive play. With just 15 points this season (6G, 9A), Almond is a checker first, scorer second. Turning to an article friend of the blog Ms. Conduct wrote for ProHockeyNews.com earlier this season, we learn this:

Almond's contributions haven’t come offensively -- he's posted only three points so far. But his talent and hard work are evident with and without the puck. He’s responsible, works hard, and has impressive hockey sense that‘s put on display during every shift.

Upon further reflection on that thought, the above quote is from January second. So, he had three points on January second, and now has 15. That's a fairly sizable jump for a checking forward.

Almond is a fifth round pick, by the Wild, back in 2007. He was chosen out of the WHL Kelowna Rockets where he had 168 points (72G, 96A) in 230 games. He is in his first year with the Aeros, and has impressed coach Kevin Constantine. Again from the PHN artice:

Constantine has coached him in twice in rookie camps and twice in Traverse City and found his development between those years was impressive.

"He was okay in his first time in both of those experiences, and really, really good his second. And so I really believe he’s an extremely quick learner and so anything you see now, I would say you can double it within a year," Constantine said. "He obviously I think would like that timetable to be shorter and it would be if it wasn’t he was so injured."

While discussing the fact that Almond is not boxed into a certain role or style of play, we get my personal favorite section of the article, and one that bodes well for both the Wild, and for Almond (quote is from Constantine):

"I think he’s got unlimited upside. We’re just trying to get him to have some consistency in his play. And everything else, he’ll just grow into as a player. So I think he’s going to be a very good pro, and I’m positive he’s going to play in the NHL."

In the trivial aspect, (from @stensation) Almond will wear #23 with the Wild, as he wears #12 with the Aeros, and that number currently belongs to Chuck Kobasew.