So. Anyone got any news today? Did anything happen any where in the world of hockey? Hmmm... looking here... scouring the interwebz, let me pull up my Google Reader here... Huh. Looks like Sweden won, oh, and Russia. Good for them. Well done. Big wins for those teams. Especially with Russia losing against Slovakia. They needed this win to stay near the top.And Sweden beating Finland? Well, that's just a big win against a big rival.

Let's see... anything else. Maybe we better put the search after the jump. This could take a while.

Wait. What's this? There was another hockey game on last night? On MSNBC? In STANDARD definition? Really? Huh. I can understand why it would be relegated to MSNBC though, since the ice dancing competition was probably a huge rivalry with outstanding play by the best athletes the sport has ever seen, right?

Turns out the USA played Canada last night. Why did no one tell me? 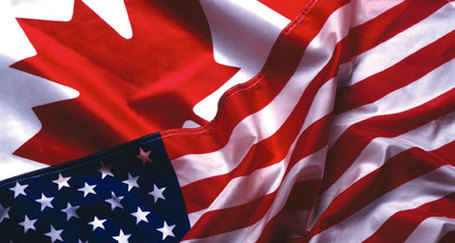 Turns out the US whooped our good Canadian neighbors. They did us proud, even if we have to cheer against every single one of them in a little over a week. In case your brain is not functional today, here are some links about the game:

USA Hockey Making a Statement: Olympics, U-20, and U-17 Teams All Defeat Canadians - Canes Country  - Apparently the Olympians aren't the only one with a taste for maple syrup.

Upstart Americans upend Team Canada | StarTribune.com - Best lead in to a gamer, ever: "This must be what hockey heaven must be like." Thanks, Russo. As if I didn't want to run through brick walls as it is.

Langenbrunner, Backes get in the way of Canada's day | StarTribune.com - Souhan with some commentary.

(updated) USA! USA! USA!; Luongo vs. Germany? | StarTribune.com- Does chanting USA! On your blog count as cheering in the press box?