Playoffs? You're Talking About Playoffs?

Share All sharing options for: Playoffs? You're Talking About Playoffs? 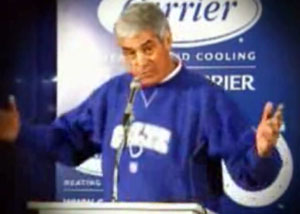 With multiple posts out there from every site imaginable about the trade deadline, the consensus is that the only way Chuck Fletcher makes moves is if the Wild are out of playoff contention. I figure it's time we look at the chances of that happening, so maybe we can have a clearer picture of what might happen at the deadline.

If any of you follow me on Twitter, you know that the first time I tried to put the numbers together, I screwed them up. However, I figured them out, and they don't look good, let's just put it that way.

Here's how I looked at it. October and November were horrible. In October, the Wild went 5-9-0, and in November, they improved to 5-3-3. Looking at the points breakdown, we see this:

In December, the Wild gave us a show. 10-6-0. Now, that's what I'm talking about. Then January came around, and they returned to Earth a bit, going 7-6-1. Back to the break down we see this:

From Russo's Twitter, he figures they need 93 points to finish in eighth.

So Russo figures a 64.8% points earning percentage is needed to get in. The Wild have not done that all season. Are they improving? Sure they are, day-by-day, they most certainly are. Except when they play the Sharks or Dallas, the Wild look to be able to beat anyone.

However, there is more to the story. Has anyone looked at the March schedule? If you haven't, you may want to.

Eight road games, six of which are part of back-to-backs. Eight home games, no back-to-backs at the X. March 11-12, it's Detroit, then Buffalo. March 18-19 it's the Predators and the Blue Jackets. Finally, March 25-26 it's Philly then Detroit again.

Finish up the year with three of five on the road in April. All-in-all it's 11 road games, 10 home games between March & April. Why is this a big deal? Because the Wild are atrocious on the road this season, at 9-19-2. Which means they have earned 20 points of a possible 60, or 33%. Not good.

Brign February back into the picture momentarily. Five home games left. Home record is 18-6-2. 38 points out of 52, or 73%. Add in the remianing ten home gaems discussed above, and they have fifteen home games left. 30 possible points. At 73%, they earn 22 points. That puts them at 80 points if they continue that pace through the end of the year.

Somewhere in the mix, the Wild need to buck their trend and win three games they are not supposed to. Can they do it? Sure they can. Felix Potvin doesn't think they can, and called them a "long shot" to make the playoffs. Six points is not a long shot to me.

W1ldfan brought up a #3 seed in his fanpost the other day. A #3 seed would mean a division championship, and is outside the scope of reality at this point, save for an epic collapse by Vancouver, Colorado, and Calgary. Calgary is doing their part, but the other two teams are playing as well as they have all year. Not going to happen. If the Wild make it in, it will be by barely squeaking over that line.

But Buddha, why bring us down like this? Why crush the hopes of so many Wild fans? Because, dear reader, it is time to sell, and unless the Wild are out of playoff contention, it won't happen. No GM, even He Who Shall Remain Nameless (changed from He Who Shall No Longer be Mentioned), is going to sell if they think the team is going into the playoffs. If they make it in, anything can happen. True Cup contenders? Nah. Not even close. Possible Cinderella story? Why not?

So, if the numbers bear out, and the Wild miss the playoffs by just a handful of points, where will they be then? They will have Owen Nolan, Eric Belanger, Marek Zidlicky, Kim Johnsson, Derek Boogaard, Shane Hnidy, and John Scott all set to walk for nothing. No playoffs, no trades, no draft picks, no prospects. Nothing.

Is that what we want? After years of He Who Shall Remain Nameless letting pending UFAs walk for nothing on a thin hope that they make the playoffs, is that what you want to see? Are we pinning our hopes to a chance that the Wild pull three extra games out of the hat, and then magically find a way to make a run against Chicago or San Jose?

Mr. Fletcher. Chuck. Let me talk to you directly for a moment. It's time, sir. It's time to distance yourself from the old regime in a way that is undeniable. It is time to crunch the numbers and see that another middle of the pack finish is worse than finishing last. Last has a reward. Middle of the pack doesn't. Your owner wants a long term contender. He gets it. Sell now. Get us some picks to be excited about next summer. Get us some prospects with those picks. We have faith, Chuck.

In Fletch We Trust.