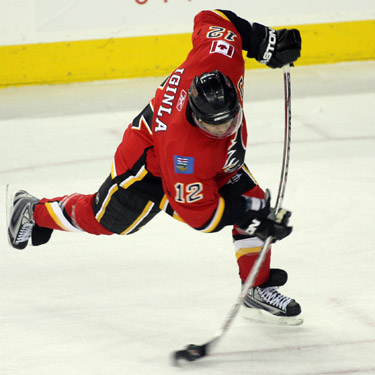 We need to take a break from our regularly scheduled hatred for our Northwest Division Rivals.

According to the Calgary Flames website, the great Jarome Iginla played his 1000th NHL game last Friday night, and Daymond Langkow did so the following night. While Langkow is a great player, and we would love to see him in a Wild sweater as much as the next perennial 20-30 goal scorer, Iginla holds a special place in the hearts and minds of those of us in Minnesota.

After all, he is the Wild Killer.

Make the jump and we'll take a look at the numbers.

Coming into this season (and not much has changed), Iggy held several records for opposing players against the Wild. These include:

Most goals in one season: 6 (which he did three times)

Most goals, career: 27 (2nd place is none other than Daymond Langkow with just 18)

In addition to these records, Iginla places in the top five in several other categories:

Iginla has, for the entire history of this team, been the player we all want to hate and just cannot find a way to do so. On top of his ability to score at will against whatever Wild team he is facing, he also has always found a way to assert himself physically.He has always had more than enough room to operate, and has made the Wild pay dearly.

One surprising thing I found while researching this post, according to HockeyFights.com he has never, not once, been in a fight against the Wild.

So, here's to you Iggy, Wild Killer extraordinaire. May you always have success, except against the Wild, and may you find another team to take out your frustrations on.

Congratulations on game #1000, and all wearing the flaming C. You are certainly a rare breed, and you have the awe and admiration of fans, even in markets that should hate you with every fiber of their being. You are a testament to the way the game should be played on the ice, and the way a human being should behave off of it. If every NHL roster had 24 Jarome Iginla's, the world would be a much, much better place.

(You may now return to hating the Calgary Flames and everything they stand for.)