Throughout these games, hockey fans have been disgraced, belittled, and beguiled by NBC. We have put up with our game being banished to the hinterlands of cable television, and you know what? We dealt with it. We came to the conclusion that the games were being televised live, which was a hell of a lot more than could be said for most of the other events.

To this very moment, I feel robbed. I could not quite place it until I was watching the montage of the tape delayed conclusion to the closing ceremonies. Join me after the jump, will you? It may get a bit long, but I'm sure it will be worth it.

Robbed. I feel robbed, despite what I consider to be the best Winter Olympics of all time. I am likely prejudiced, as I honestly do not remember many of them from the past. I do not remember Turino. I don't. I was busy living my life, young and stupid perhaps. Four years ago I was also in the midst of a divorce, and all of the joy that comes with it. Previous games to that, I was just too young to care, the US did not compete in any event I cared about, and many of the games were over seas, and I have no interest in tape delayed sports. None.

Now, why do I feel robbed? I feel robbed because finally a Winter Olympics was in our own backyard. We would be able to watch live sports featuring athletes in their prime, with some of the best back stories in the history of humanity. It was not to be. It simply wasn't going to happen for US viewers, since we were subject to the abject stupidity of the morons at NBC.

Why should it matter that the events are tape delayed? Why should I not be content to see the edited footage of the events, with the back stories built in for me? Why, or dear jeebus why, would I not buy into the commercialized, canned, boring, life sucking, tape delayed Olympic games?

I'll tell you why. I needed this. I think we all needed this and were just unwilling to admit it. I think Olympics of the recent past did poorly on TV because times were pretty good. We didn't need the Olympics. We needed our reality shows and mind numbingly stupid standard TV dramas. We had no interest in athletes who worked their tails off despite horrible family backgrounds. We had houses to buy and markets to inflate, you know?

This time, we needed the games. We needed live events and real people doing extraordinary things. We needed this generation's version of the Miracle on Ice. We are living in the worst economic times since the Great Depression. We are living in the midst of two wars that have been going on longer than many children in this country have been alive, and we see no end in sight. We are worn down, worn out. Sick and tired of being sick and tired. We may not have the big, bad Russian threat and the Cold War, but the desperation for something to save us is no less palpable.

We needed the escape of the spectacle that is the Olympics. The reminder that people can indeed come together from across the planet, from countries that hate each other, and compete on a stage of peace.

We needed to be shown, LIVE, the mogul event, so we could see Alexandre Bilodeau the Canadian win the first ever gold medal on home turf for the Canadian people, all the while giving the credit to his brother. His brother with cerebral palsy. To hear him respond to Bob Costas' question of "Your brother must be the happiest person alive right now," with "My brother is always the happiest person alive." We needed that, but we needed it live. We needed to be able to experience it, not be told about it. 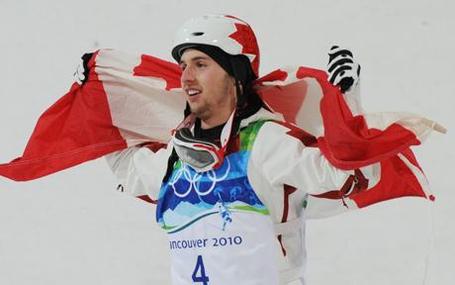 We needed Lindsey Vonn to race, and we needed her to do so live. We needed to experience her winning the gold medal, not be shown it four hours later. We needed to witness her emotions when she fell and broke her pinkie. We needed that. We needed the story of how Vonn is estranged from her father due to issues with her husband and their relationship. We needed to know these are real people, with real issues and then we needed to see them excel despite them. 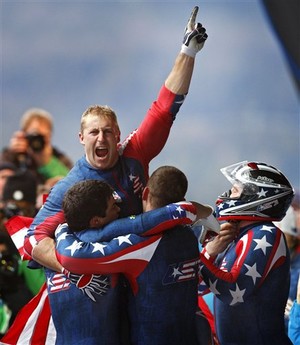 We needed that feeling. The one on Sidney Crosby's face when he won that game. We needed to face our rivalry with our northern neighbors and celebrate with them even when they beat our boys. Hockey provided us with the rare live event. I am happy that my favorite sport could do that, even if on some hillbilly backwards cable news station.

I still feel robbed. NBC robbed me, and you, of the one thing we needed more than anything. Happiness and joy on the faces of kids. Let's face it. Most of these people are kids. Teens, early twenties. Kids. With back stories that bring tears to our collective eye and make us forget, if only for a moment, that the world around us wants to come apart at the seams.

They finally went too far by cutting away from the closing ceremonies to air the pilot to a show based on the idea that we would get off on watching our fellow human beings fight with each other while celebrities made fun of them. I don't think so. I feel robbed.

Side note... I swear to you that NBC is dead to me. I have a (hopefully) long life ahead of me. After the abuse that NBC has put me through for the past two weeks, the network is gone.

I needed peace. I needed happiness. I needed regular people doing extraordinary things despite massively long odds against them. This is why I am so upset with NBC for their epic failure on the coverage, Chris Chase of Yahoo! (a good guy by the way). This is why I am so upset that the west coast of the US got no live coverage of the games. They are Americans, too, and they were viciously robbed of their patriotic right to witness the glamour of the Olympic games.

In the words that echo at the closing of each Olympics, "I call upon the youth of the world to gather in four years..." Hopefully with a network that truly understands what is at stake.